Nissan U.S. sales in June were nothing short of astonishing. While many of its competitors struggled particularly when it came to moving cars, consider these June 2016 numbers, with the percentage representing a comparison to June 2015:

Overall for the month Nissan was up 13.4%, and realize that unlike the Detroit Three, Nissan’s pickup trucks are not sales behemoths. Yes, the midsize Frontier showed a gain of 84% but the Titan was off 22.4%. (And don’t read too much into the Frontier’s 84% rise, because the number of units is 8,166. In June Chevy moved 9,049 of its midsize Colorados and Toyota Tacoma, the stalwart leader in this segment, drove off lots 15,809 times.)

One chink in Nissan’s armor that undoubtedly bothers Carlos Ghosn to no end, given what a staunch supporter he is of the tech, is the all-electric LEAF. In May its sales were off 47.2% (1,096 units) and it is down 41% for the first half of 2016. 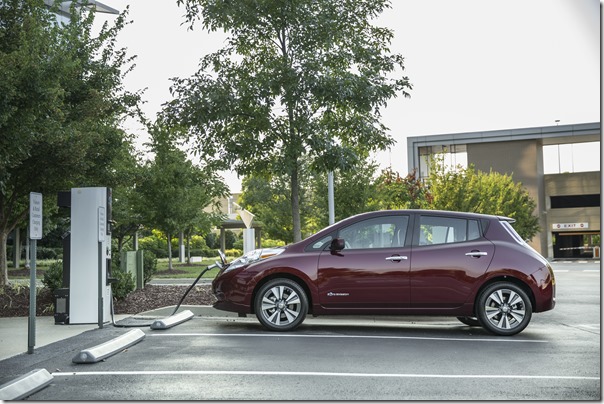 So to—and this is an almost-literal use of the term—jump start sales of the LEAF, Nissan has expanded its “No Charge to Charge” program for the LEAF to another 11 markets. This brings the total number of markets where new LEAF owners can get two years of free charging at participating public chargers (which can be found by going to www.ez-charge.com/stations ) to 38, and these markets are spread across the country.

The LEAF SV and SL models have an EPA range of 107 miles and the changing station can bring a LEAF lithium-ion battery from 0 to 80% charge in about 30 minutes. (It’s that last 20% that takes longer—sort of like the last five pounds in dieting.)

Just imagine buying, say, a Sentra or a Maxima and getting two years of free gas. Astonishing. And so is the challenge that EVs face in trying to penetrate the market.