Porsche took a risk 18 years ago. It won. Big.
#Porsche

Porsche has produced a million Cayennes.

That pretty much says it all.

Remember back in 1998 when it was revealed that Porsche was developing an SUV?

Gasps could be heard from around the world by those who were mainly incensed that the premier sports car manufacturer was going to be building, well, something like a truck.

Increasing Use of Structural Adhesives in Automotive
The Software Revolution Is Here It’s a great time to be a software engineer in the auto industry. 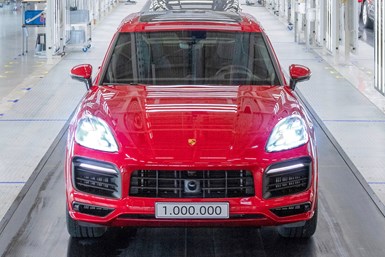 The millionth Porsche Cayenne, a GTS in Carmine Red, rolling off the line in Bratislava. (Images: Porsche)

Yes, the Cayenne was big.

But (1) it was fast; (2) it didn’t handle like big SUVs did back then; it was designed by Harm Lagaai.

It was a Porsche.

And the company hasn’t looked back since.

“It was a bold decision to build an SUV at the end of the 1990s, but this decision meant that Porsche was able to surpass all expectations just a short time later,” said Hans-Jürgen Wöhler, who was recently vice president of the SUV product line and who is now concentrating on the Macan—yes, the other Porsche SUV.

Hard to believe that about 20 years ago that vehicle second from the front was seen by some as an outlier.

During the first three quarters of 2020, Porsche sold 191,547 vehicles globally—of which 64,299 were Cayennes, the top-selling model among the brand’s offerings.

When the Porsche team started working on what was then “Project Colorado,” based on the platform that was to be shared with the Volkswagen Touareg, the team members knew what Porsche is, and more importantly, perhaps, what Porsche isn’t.

They produced something that then seemed almost bizarrely off-brand.

But because of their focus on what it takes for a vehicle to be a Porsche. . .

Well, now they’ve built a million of them.