Appears in Print as: 'Tech Watch'

Try as they might, it’s hard for technology marketing executives to make chipsets sound sexy. The new NVIDIA DRIVE AGX  (www.nvidia.com) carries a name that has a certain sports car ring to it. But it’s what the tech proposes to do–anything from serving as a platform for autonomous vehicles to robots–that adds some potential excitement to the innovation. 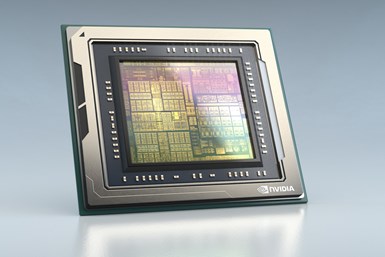 NVIDIA’s platform is made of made up of 17 billion transistors, as well as four years of R&D, and is powered by a new system-on-a-chip called Orin.

The platform is made of 17 billion transistors, as well as four years of R&D, and is powered by a new system-on-a-chip called Orin. Orin’s mission is managing all those applications and the deep neural networks that need to run in the background for autonomous vehicles and robots. Orin also integrates NVIDIA’s next-generation graphics architecture. Taken together, the system delivers 200 trillion operations per second—nearly seven times the performance of NVIDIA’s previous-generation setup.

It was all created to support platforms that scale from a Level 2 to full self-driving Level 5 vehicles. And NVIDIA is rolling it out to attract OEMs looking to build supporting software products at scale that requires plenty of processing power to perform. The family will include a range of configurations based on a single architecture, targeting automakers’ 2022 production timetables.

Of all the high-tech things that could go wrong with a semi-autonomous vehicle, from software glitches to network failures, the idea of a car being hacked is fairly easy for most people to understand. It’s also one of the key reasons the public remains, at best, circumspect about the prospects of driverless vehicles dominating the highways and city streets.

Denso (denso.com) and NTT Communications Corporation (ntt.com) say they will be validating their jointly developed Vehicle Security Operation Center (V-SOC) technology, designed for monitoring and analyzing vehicle’s security status. The overarching goal: Prevent cyberattacks on connected cars, which continue to grow in both capabilities and therefore in cyber vulnerabilities.

The next step is hitting autonomous vehicle systems with a battery of different types of cyberattacks on test vehicles to find out how effectively their solution fends them off. The idea is to continuously improve the software with the onslaught of cyberattacks.

Denso will provide information security, vehicle communication, and data analysis technologies used in in-vehicle systems. For its part, NTT Com will use its technology to evaluate networks, cloud computing and security services.

The original 2011 Chevrolet Volt battery weighed in at 435 pounds. The Tesla Model 3’s power pack tips the scales at 1,054 pounds. While those are two very different electric drive vehicles (with very different battery pack demands), weight doggedly remains one of the biggest obstacles to the spread of EVs.

Texas A&M University College of Engineering scientists show off electrodes so strong, they say they could double as batteries in places like body panels for electric vehicles.

Led by chemical engineering professor Jodie Lutkenhaus, the research led to an entirely new family of structural electrodes. In an article published in the journal Matter, they describe the process of creating new supercapacitor electrodes based on dopamine functionalized graphene and Kevlar nanofibers, structures the scientists claim have drastically improved the mechanical properties.

Dopamine, which is also a neurotransmitter, is a highly adhesive molecule that mimics the proteins that allow mussels to stick to virtually any surface. The use of dopamine and calcium ions also leads to a significant improvement in mechanical, scientists note.

Under the Radar Weight Savings

If the hardware is heavy, perhaps the right software can do a chunk of the heavy lifting. Or so goes the thinking from Oculii (oculii.com) and Infineon (infineon.com), which are collaborating on radar software designed to overcome the weight challenges presented by the demands of radar. The two firms believe their tech will scale up the performance of single-chip solutions geared toward anything from Level 1 ADAS, all the way to multi-chip systems required for Level 4 Autonomous Driving.

“Our team has demonstrated that our software architecture can improve angular resolution and field of view by an order of magnitude,” said Oculii CEO Steven Hong. “We are looking forward to collaborating with Infineon to bring this technology to the broader automotive market.”