Regulations are driving vehicle manufacturers to find the ways and means to reduce fuel consumption. And German-based supplier KSPG has some things that can help.
#tech #HP 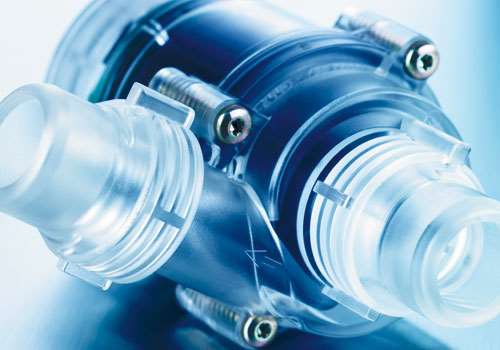 A KSPG electric water pump. Once the company had a single customer for this energy-efficient component—BMW— but with the advent of European CO2 emissions, the plant producing the pumps in Germany is running full out.

Dr. Gerd Kleinert of KSPG: “The combustion engine will play the most important role for the next 15 to 20 years.” So his company is focusing on many auxiliary devices—like various pumps—as well as more efficient pistons to help OEMs meet regulatory demands.

Dr. Gerd Kleinert, CEO of powertrain components supplier KSPG AG (kspg.com), recalls that the company’s first customer for its electric water pumps was BMW. It was back in 2004. “We tried to sell this pump to everyone else in the world,” he says. “At the end of the day, we didn’t sell any.” The electric water pump is more expensive than a conventional belt driven pump. Which is why others weren’t interested in buying the electric water pump.

Because the output of a conventional belt-driven pump is predicated on the rpms of the engine, and because there are varying conditions, both environmental and under the hood, it is generally the case that the pumps are bigger than is probably necessary, given that they have to provide sufficient coolant pumping under all conditions (e.g., if there is a low engine speed yet high load and high external temperatures, then the pump still has to be able to provide sufficient output).

Because the output of a conventional belt-driven pump is using mechanical energy from the engine, it is drawing on the output of combustion.
The electric pump runs off of the vehicle’s electrical system. The output of the pump is predicated on the cooling required. The pump can be right-sized, not over-sized. The pump is responsive from start-up. (And it can actually continue to operate when the engine is shut off, which is a benefit for cars that are being equipped with start-stop systems, including hybrids.)
And then, Kleinert says, the European Parliament passed new car regulations setting caps on the amount of CO2  that vehicles can produe. The regulation requires that there be a 130 g/km average by 2015, which is being phased in so that average is reached by 2015 (65% compliance by 2012, 75% in 2013, 80% in 2014). Then there is another 10 g reduction that must be achieved through “complementary” measures, like the greater use of biofuels. There are fines that the OEMs must pay for every g/km they are out of compliance.
One consequence: European vehicle manufacturers are looking at all ways and means to reduce fuel consumption (burn less fuel; have fewer emissions). Including replacing things like water pumps. To be sure, the amount of fuel saved may be as little as 3%. But every milliliter of fuel matters.
And now, Kleinert says, the plant in Hartha, Germany, where they’re making the pumps for European OEMs, is running 24/7. “We are working on doubling our capacity.” The additional spend for the electric water pump is well worth it, not only from the standpoint of the performance efficiency, but also because Kleinert points out that there is a social pressure for European vehicle manufacturers to become more environmentally oriented in addition to the regulatory one.
KSPG is developing a variety of technologies for vehicle manufacturers around the world to improve their fuel efficiency. Kleinert says, “The combustion engine will continue to play the most important role for the next 15 to 20 years.” He points out that while there is a great deal of attention currently given to hybrid vehicles, they still have combustion engines, which necessitates things like pumps.
The problem with electric vehicles: “It is not a problem to adapt an electric motor to a car. The problem is with the energy storage. If someone were to come up with a battery that was the same size, weight, and energy content of a fuel tank and you could recharge it in three minutes . . . But nobody knows if there is a physical or chemical basis to build a battery like this.” Kleinert also points out that the lead-acid battery, which was invented in 1859, and the internal combustion engine are proximate in age, yet the advances of the latter are far greater than is the case for the former, which has a whole lot to do with physics and chemistry.
While KSPG offers developments at a component level, like a new compact exhaust gas recirculation (EGR) valve that operates via a gear-driven DC motor and uses a Hall sensor that magnetically determines valve position, it has also collaborated with FEV (fev.com) to develop a 30-kW range extender for vehicles. The concept system makes use of a 30-kW (40 hp) two-cylinder V-configured engine with a vertically oriented crankshaft. This means that the unit is compact. It can fit within the spare tire wheel recess in the trunk of a small vehicle. It is used to drive two electric motors. Kleinert suggests that this could be an option in electrically powered vehicles, providing a solution to the range-anxiety issue. He admits that this is a “bridge solution” between a conventionally powered and an electric vehicle. (The range extender is in compliance with Euro 6 emissions regulations, so while not as completely green as an EV, it is still reasonably clean.)
Another development they’re pursuing, which was originally conceived by enTec Consulting GmbH (entec-consulting-de), is a variable valve control system called “UniValve.” This is an electrometrical system that provides continuous variation of valve opening with simultaneous adjustment of the valve lift. The actuation is performed by a control shaft that’s driven by a brushless electric motor. The valve timing and lift control facilitates better combustion conditions, thereby improving fuel efficiency, particularly when operating in conjunction with cam phasing. It is recommended that the system be used on both the intake and exhaust side of the valve train to achieve maximum performance. Kleinert says that the system can provide as much as a 10% overall fuel efficiency improvement, and that when the 2020 European CO2 regulation of 95 g/km, systems like UniValve “will be 100% on engines.”
Of that impending regulation, Kleinert admits, “This is a tough target. But we are convinced it is achievable.” And they have an assortment of technologies that can help do it.