On the 2018 Chevrolet Equinox

To say that the Equinox crossover is important to Chevrolet is to vastly understate the case.

The compact CUV arrived on the scene in model year 2005 with a standard 185-hp, 3.4-liter V6 engine mated to a five-speed automatic transmission. Then there was a second generation in 2010, this time with two powertrains available: the standard 182-hp 2.4-liter four and a 264-hp, 3.0-liter V6. Both had six-speed automatics.

While the vehicle had a midcycle refresh for 2016, the rest of the industry started producing compact crossovers to meet the market’s growing appetite for the vehicles. Many of these vehicles left the Equinox credible, but not incredible. 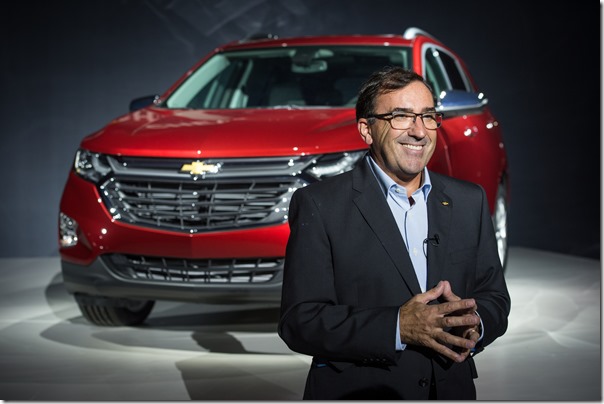 Alan Batey, president of General Motors North America and Global Chevrolet brand chief, at the reveal of the 2018 Equinox (held, not coincidentally, on the autumnal equinox) points out that back in 2004, the compact SUV and CUV sales in the U.S. were on the order of 7 percent of the market. That has soared to some 18 percent.

In the context of Chevy, the Equinox is the number-two best-selling vehicle in the entire lineup.

The top-selling Chevy from January through August 2016 is the Silverado pickup, at 380,176 units.

One of the things that Chevy has been doing under the direction of John Cafaro, executive director, Chevrolet Global Design, is redoing the vehicles in the lineup.

Two notable examples are the 2016 Malibu and the Volt.

Again through August, Malibu sales of 148,868 vehicles represents a 14.4 percent increase versus the same period in 2015.

And while Equinox’s 158,475 bests both of those cars (and it should be recognized that those are both sedans, a segment that is weakening in light of the utility vehicles’ growth), that number is off 17.7 percent. 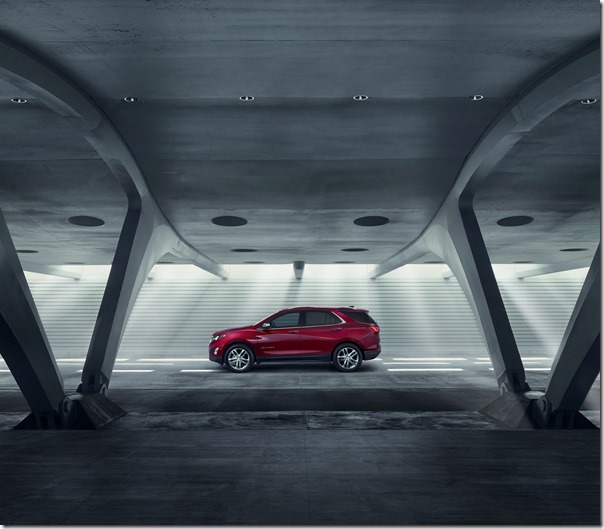 So for model year 2018—which means, in this case, “coming next Spring”—Chevy has put the Equinox on a new platform with new sheet metal, new interior and new—and interesting—powertrain options.

Well consider: all three of the fours are turbocharged.

And for another, one of the three is a 136-hp, turbodiesel that provides 236 lb-ft of torque.

Note how Messrs. Batey and Cafaro have “global” in their titles? Well, it so happens that in Europe there happens to be the opportunity to order an Opel Astra or Insignia with a 1.6-liter “whisper diesel.” Yes, the technology for the diesel that will be available in the U.S. in the Equinox sometime next year after the launch has that engine under the hood. (Why “whisper diesel”? Because it is quiet, so quiet that GM Vauxhall posted a YouTube video on that subject.)

The standard engine is a 170-hp 1.5-liter. It, like the turbodiesel, is fitted to a six-speed automatic, the Hydra-Matic 6T40 for it, and the 6T45 for the turbodiesel. 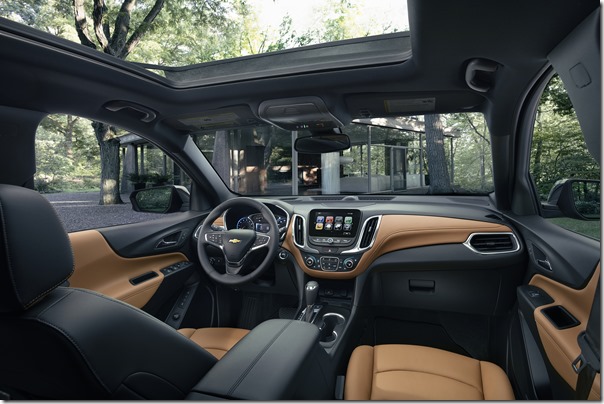 There is another interesting number related to the 2018 Equinox: 183.1. That’s the overall length in inches. It is interesting because the current generation has an overall length of 187 in. Yes, the 2018 Equinox is more compact than its predecessor (something that we’ve seen GMC do with the Acadia crossover). However, the vehicle is said not to stint on passenger volume as a result (however, the cargo area behind the second row suffers some, going from 31.5-ft3 in the 2016 model to 29.9 in the new one). Maximum cargo space for the 2018 is 63.5-ft3.

As regards the styling, which was performed in the GM Design Studio in Warren, Michigan, Cafaro says, “There’s a lot of Malibu in the vehicle.” This is not a case where they’ve taken a sedan and simply provided greater ground clearance, but, he explains, “This is taking the Malibu passion and design execution into the crossover segment. They are two companions in the showroom.”

He adds, “We have a lot of design equity built up in it”—the Equinox cumulative sales top two-million—“so it is a balance how far you reach and have the look and feel of an Equinox.”

According to Cafaro, in the studio they have an “Equinox team—just like the Corvette team.”

While some might argue that that is a bit of an exaggeration, clearly Cafaro and his colleagues went at the crossover with the zeal that is characteristic of things like the Malibu and Volt—and as previously pointed out, both of those cars are going in the right direction sales-wise.

And one more thing: they had to think globally, as the 2018 Equinox is eventually going to be available in 115 markets around the world.