On the Nissan Titan XD: The Industrial-Strength Pickup

While Nissan will have various cabs and powertrain offerings for its all-new pickup, it is starting with a crew cab and a V8 turbodiesel to underscore the fact that this is a serious truck.
#Ford #Toyota #Bosch 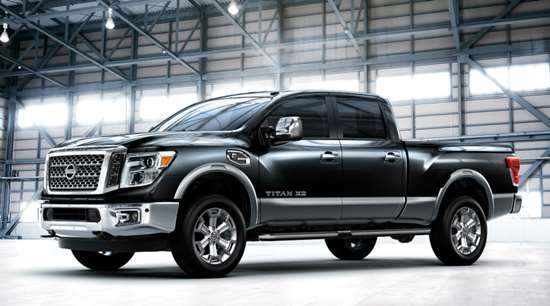 Pickup trucks are pretty much an American phenomenon, so it should not be at all surprising that the Titan XD was planned, designed, engineered, and is being manufactured in the U.S. There were contributions from Nissan personnel who are based in California, Arizona, Michigan, Mississippi, and Tennessee. The diesel engine is being sourced from Cummins of Indiana. 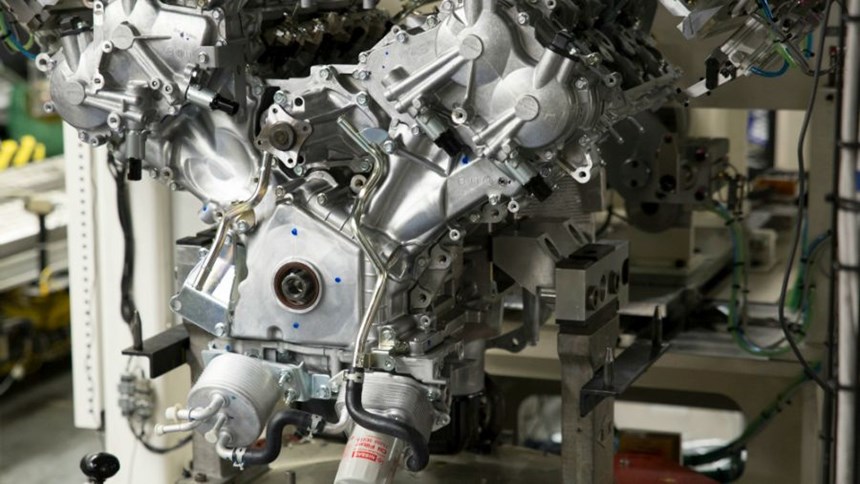 Although the Titan XD premiered with the Cummins 5.0-liter V8 diesel under its hood, Nissan has also developed a 5.6-liter V8 for the pickup. The “Endurance” engine provides 390 hp @ 5,800 rpm and 401 lb-ft of torque @ 4,000 rpm. It features direct gas injection and “Variable Valve Event & Lift" technology (which combines hydraulically controlled variable valve timing with electronically controlled variable valve lift on the intake and exhaust side). It is mated to a seven-speed automatic with adaptive shift control and downshift rev matching. The Endurance is assembled at the Nissan engine facility in Decherd, Tennessee. 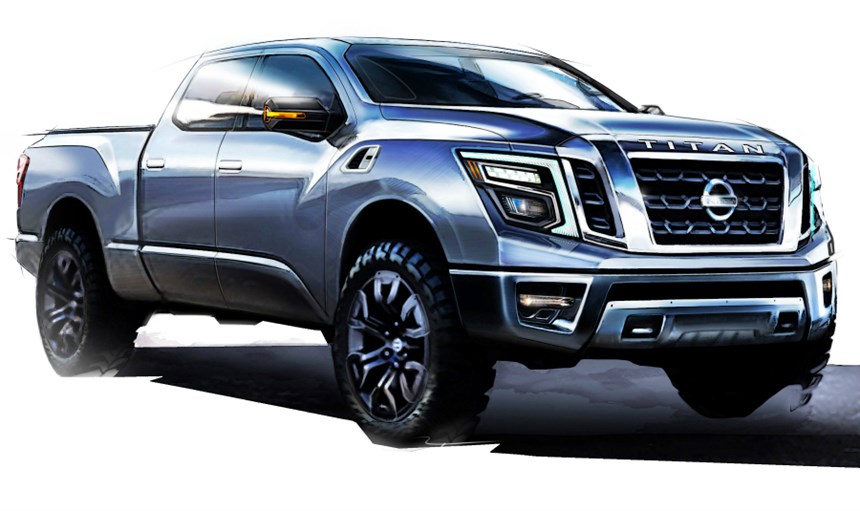 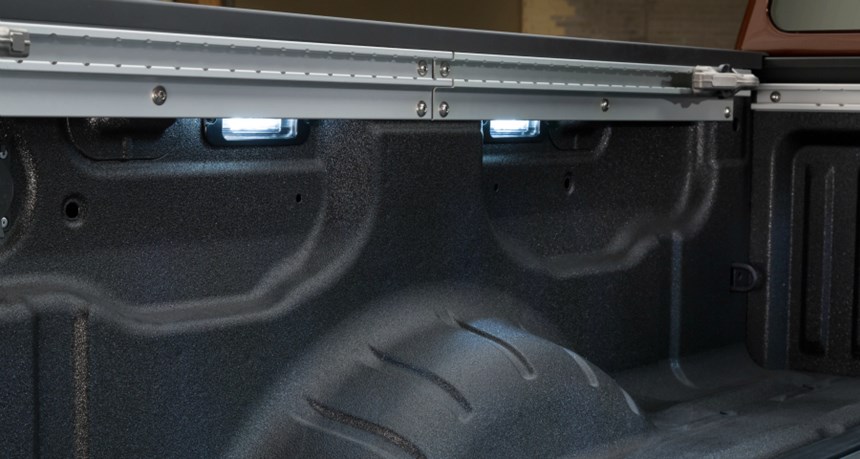 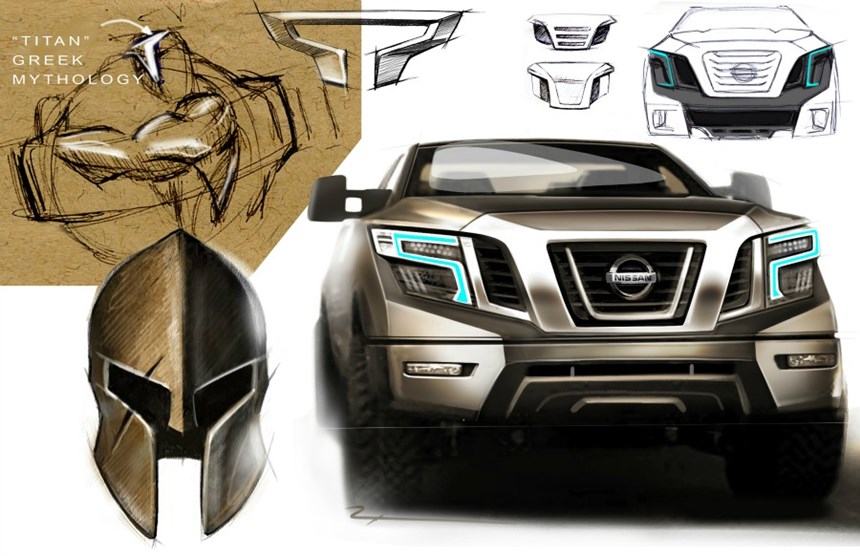 Diane Allen, senior manager, Nissan Design America, and her team created the look of the 2016 Titan, taking cues from everything from Greek mythology to precision tools. Allen had the opportunity to work on the first-generation truck, as well, so she had some ideas regarding where and how to make a distinctive vehicle design. Here is an array of sketches that led to the production truck.

The fact of the matter is that the Nissan Titan hasn’t actually had the sort of sales that would make anyone competing in the full-size pickup segment become particularly concerned.

It’s not that the truck, manufactured in the Nissan complex in Canton, Mississippi, was in any way, shape or form deficient. Rather, it’s that there really wasn’t a highly compelling reason why someone would opt for a Titan rather than something else like an F-150 or a Silverado or even a Toyota Tundra since the truck appeared on the market in 2003 as a model year 2004 vehicle. Truck buyers are among the most brand-loyal of all vehicle customers, so in order to move the needle, something must be provided that they can’t get elsewhere or otherwise.

If we go back to the thinking that was behind the development of the 2004 truck—and realize that the 2016 Titan is the second generation, so it has been long in coming—it is clear that it was more supplemental than ground-breaking.

Then-vice president and general manager of the Nissan Div., Mark McNabb, said in 2003, “Our challenge in entering this well-defined, brand loyal and product knowledge truck market is to first get the basics done right and then build on those core attributes with a new level of style and innovation.”

He went on to say, “One of our first targets in developing the new Titan was to fit in before we could stand out. Trucks have become a necessity rather than an accessory for active lifestyles, so we had two goals: to meet or exceed the capacities and capabilities of the gold standards in class, and then bring to the table fresh ideas, items that have never been done before.”

This time it is more than fitting in. More than incremental. Sure, the last time they did things like provide a factory-applied spray-on bed liner; tailgate lighting; bend extender; bedside storage system; dampened tailgate and the like. All good.

But this time it is something entirely different that they’re initially launching.

And the Titan XD is a light-duty, not heavy-duty truck, where diesels tend to reside. There is, of course, the diesel in the Ram 1500 EcoDiesel. However, the difference between the two, says Rich Miller, director, Product Planning, Trucks, SUVs, CUVs & Commercial Vehicles, Nissan North America, is that the Titan is engineered for capability, not fuel economy. The Ram EcoDiesel is powered by a V6 that produces 240 hp @ 3,600 rpm and 420 lb-ft of torque at 2,000 rpm.

However, this gets to a key differentiator of the Titan XD. Ford, GM and Ram all have heavy-duty versions of their pickups. These are offered with diesel engines. So, for example, there is the Ram 2500 Heavy Duty, which is available with a Cummins engine, as well. In its case it is an in-line six. It produces 370 hp @ 2,800 rpm when mated to a six-speed automatic. And 800 lb-ft of torque at 1,600 rpm. But Miller says that ¾-ton trucks like the Ram 2500 are too much for many people, people who are more aligned to ½-ton trucks.

So here is the big difference that the Nissan developers went after when creating the 2016 Titan. Miller suggests that over the years there has been a regular one-upsmanship going on among the truck builders as they keep increasing the towing capacity offered by their trucks. But he points out that things like horse trailers really haven’t gotten all that much bigger over the years. So what’s the point of having, say, 15,000 pounds of towing capacity?

With the Titan,  Miller says, they’ve basically gone back to the characteristics of what defined a ¾-ton truck—in 2003. 310 hp. 550 lb-ft of torque. Depending on the trim level and the drive system configuration, the towing capacity of the Titan XD ranges from 10,608 pounds to 12,314 pounds., puting the truck in between light- and heavy-duty offerings from the competitors.

And while on the subject of towing, they’ve deployed some non-machined-or-welded technology to facilitate it, such as offering a rearview monitor on a 7-inch display with trailer guides to make backing up to the thing to be towed quite simple. In addition to which, there is the ability to check whether the trailer lights are working by using the keyfob instead of having someone out back giving the driver the high sign.

While one might think that Nissan doesn’t have a whole lot of experience with trucks, it is worth noting that they have a rather extensive commercial vehicle business, so they went to that knowledge base for the Titan XD frame development. The frame is a fully boxed, extensively reinforced, full-length ladder design.

The front suspension is a double-wishbone with a stabilizer bar, and there are hydraulic cab mounts; the rear uses leaf springs and twin-tube shocks. The axle is from American Axle Manufacturing. The rear diff is 13-inches with 3.5-inch axle tubes; the front diff is 9.25 inches. There are disc brakes all around. Steering is a recirculating ball-type with a parallel rod
steering linkage.

This time it is different for Nissan. While at the launch of the first-generation Titan it was almost as though there was a box that needed to be checked to supplement its car, SUV and crossover offerings, the company has a commercial vehicle lineup now, so it is more fully engaged in what’s required by the trades. Which explains, in large part, why it has launched its all-new Titan with a diesel rather than the gasoline V8, underscoring the industrial-strength nature of its undertaking.