At the Geneva Motor Show, Opel exhibited its GT Concept, a front mid-engine, rear-drive car that is predicated on the production model GT from the ‘60s and ‘70s.
#Carbon #HP #Opel

At the Geneva Motor Show, Opel exhibited its GT Concept, a front mid-engine, rear-drive car that is predicated on the production model GT from the ‘60s and ‘70s. The design is quite minimalist, in that there are no door handles, mirrors or other things on the body surface. There isn’t even a trunk lid. There are a long hood and short overhangs. There is a central dual exhaust. 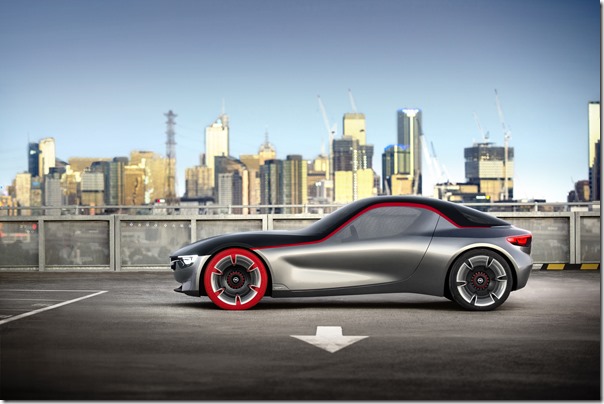 The engine is a 1.0 liter, three-cylinder turbocharged, direct-injection unit that provides 145-hp (the engine is a variant of that used for the Opel ADAM, Corsa and Astra); there is a six-speed transmission that is paddle-shifted.

The vehicle, which weighs less than 2,200 pounds, accelerates to 62 mph in less than eight seconds. It has a top speed of 134 mph.

But what’s obviously notable is the red line that horizontally splits the body. . .and the front red tires.

The tires (front and rear) were developed for the Opel GT Concept by Hankook.

Rather than using traditional carbon black for the red tires, the special filler materials are added to a white compound material. The tires are approximately the size of conventional 225/40R18 tires found in a tire store near you. 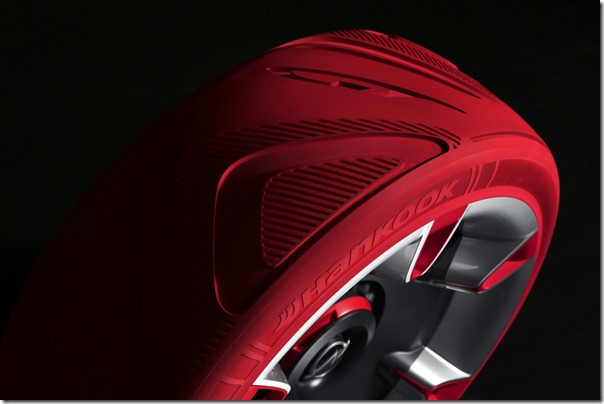 Although these are concept tires, according to Klaus Krause, who is head of Hankook’s European Technical Center in Hanover, which worked on the GT Concept tires, colored tires are technically feasible for production cars.

But he points out that “taking the colored design further than the sidewall would lead to significantly higher production costs.”