This is a good news-bad news sort of thing.

“The results of this survey”—a survey of 1,200 American adults, including 200 with mobility issues—“confirm that autonomous vehicles face major perception challenges, and that education and outreach are the keys to improving trust.” So said Tara Andringa, executive director, PAVE. 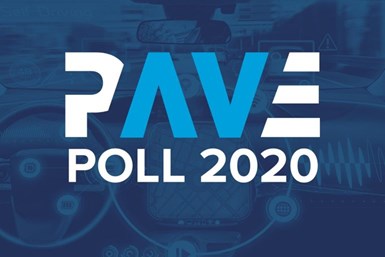 The good news part is that PAVE—which stands for “Partners for Automated Vehicle Education” and includes members such as AAA, Audi, Ford, GM, Lyft, National Federation of the Blind, NVIDIA, Toyota, Velodyne, Voyage, Waymo, and many more—has as its mission the education of both policy makers and consumers.

The bad news part consists of those perception challenges.

That said, the respondents also admitted that they don’t have a whole lot of understanding of the tech, with 60% saying they’d have greater trust if they “understood better how the technology works.” Nearly as many—58%—said their trust would be increased if they “had a chance to experience an AV ride firsthand.” (Sort of odd, given that you sit in vehicle; vehicle drives.)

People with mobility issues—which includes the use of a cane, walker, wheelchair, scooter; are deaf; have low or no vision; etc.—are actually more knowledgeable and positive about autonomous vehicles. That is, on a scale of -100 to +100, people with mobility issues are rated at -13 when it comes to knowledge about the technology, which is still below zero but less so than the -21 for the general public. In addition, 43% agree that “the advantages of AVs outweigh any potential disadvantages” vs. 34% of those who aren’t self-described as having a mobility issue.

All of which means that PAVE has a whole lot of educating to do.

As Andringa puts it: “These insights provide both motivation and direction to our effort to confront this educational challenge.”

We dive deeper into the results of the PAVE survey on the weekly episode of Autoline After Hours. View the episode now.