Idea: On the Road—Happiness During a Pandemic

Eighty percent of Americans say that going on a road trip was “one of their happiest moments” during the COVID-19 according to a survey conducted by The Harris Poll for Chevrolet.

What’s more, 78% said that road tripping has “helped me keep my sanity,” which is, clearly, a bit of an exaggeration. 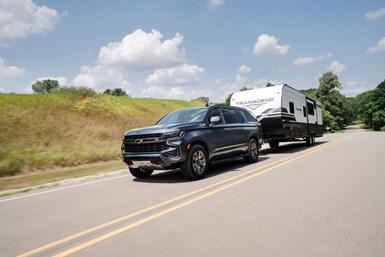 Other findings are that:

Chevy had the study conducted because it is rolling out its all new Tahoe and Suburban.

One finding undoubtedly made the vehicles’ product planners happy: 53% said that having more cargo room would make their trips better.

A slightly sad thing: Chevy recommends that people check out the CDC website for information regarding taking safe road trips.

Electric commercial delivery trucks are becoming the new “thing.” Another entry into that space is the Volta Zero from Swedish firm Volta Trucks.

While still conceptual, when it goes into production—planned for 2022 through a contract with a yet-to-be named manufacturing firm (another approach that is becoming increasingly common in this space)—the 16-tonne city truck will offer a payload capacity of 8,600 kg, have 37.7-cubic meters of payload space and be capable of handling 16 Euro pallets. 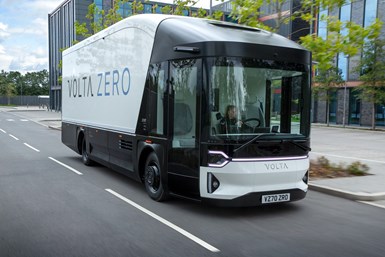 Note the glass on this EV providing the driver with a fairly unobstructed view. (Image: Volta Trucks)

The vehicle will use lithium ion phosphate batteries ranging in power from 160 to 200 kWh (the batteries have a modular design), providing a range of 150 to 200 km, which is said to be appropriate for a “last-mile” delivery vehicle.

And yes, it will use environmentally friendly materials, such as a flax and biodegradable resin composite for exterior body panels.

But what is the most interesting thing about the Volta Zero is that considerable attention has been paid to the cab design with a particular emphasis on advancing safety.

As in: “Safety is at the heart of the Volta brand for one simple reason. In London, as an example, 23% of pedestrian fatalities and 58% of cyclist deaths involve an HGV [heavy goods vehicle], yet large trucks only account for 4% of road miles. This is clearly unacceptable and must change. The Volta Zero completely reimagines the commercial vehicle, ensuring it can operate safely with all road users and become a friend of the zero-emission city”.--Carl-Magnus Norden, Founder of Volta Trucks.

So the cab is greenhouse-like in that it provides 220-degrees of visibility around the vehicle. Rear-view cameras are used in place of mirrors, and there is a 360-degree birds-eye camera.

The driver sits lower than in a traditional truck so that the driver’s eye line is at about 1.8 meters, or the approximate height of pedestrians (remember: this is going to be used in city settings).