Plastics Under the Hood

Using plastics under the hood in place of metals is something that’s been underway for the past 20 years. And the transitions continue.
#HP #Volkswagen #Ticona 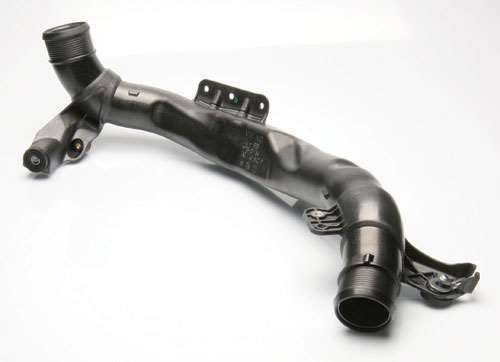 While this charge air pipe for a VW diesel engine might ordinarily be made of aluminum due to the high heat involved, this one is produced with a glass-fiber reinforced polyphenylene sulfide (PPS) from Ticona because it is (1) lighter and (2) less expensive to produce than the metal version.

An electric water-circulating pump— both housing and impeller—are produced with Fortron PPS. The components see temperatures up to 140° C.

When you ask Bob Newill, Ticona Engineering Polymers (ticona.com) marketing guy who handles Powertrain for the supplier, about the se of plastics under the hood, you get the sense that the question is somewhat surprising because of the ubiquity of the materials under there: “Plastics have made big gains there in the last 20 years.” And he begins to tick off areas where there is common usage, such as intake manifolds, fuel rails, fuel delivery modules, brackets, shrouds, pipes, duct work, brackets, accumulator pistons for transmissions. . . And more.

So then you ask about the drivers for this use, and he provides an example Under the Hood of a blow-molded charge air pipe that was developed for a 168-hp, 2.0-liter Volkswagen diesel application by Röchling Automotive (roechling.com) in Germany. The pipe runs from the engine’s turbocharger to the hot side of the harge air cooler, which means that it has to have high heat resistance. So the material selected was a polyphenylene sulfide (PPS), trade named Fortron, which offers heat resistance up to 240°C and high dimensional stability. The material used to blow mold the pipe has a 15% glass fiber content. There is another Fortron grade, this one with 30% glass fiber reinforcement, used for the production of fastening lugs and brackets that are attached to the pipe during the blow molding via a process developed by Röchling that it calls “Spritzfügen,” or injection bonding. In Spritzfügen an injection unit on the blow molding machine injects two fastening lugs during the blow molding cycle, just after the pipe is inflated. Consequently, there is a high-strength bond between the components without the need for separate, secondary operations. However, there is a second step, where two more components are attached to the surface of the pipe with injection bonding in a separate injection molding machine.

Newill says that the pipe is usually produced with metal. And this brings to the fore several advantages of plastics for under hood applications like this one. For one, Newill points out that the blow-molded design has a complex shape with contours that packages tightly to the engine, “which you couldn’t do in metal.” This, he says, is something that is becoming increasingly prevalent in vehicles where there are not only downsized engines, but downsized real estate under the hood. With space at a premium, making the most of nooks and crannies is key, and plastics facilitate that.

Another advantage: weight. Again, as vehicle manufacturers look for the ways and means to reduce overall vehicle weight, using plastic rather than metal can make a contribution. In the case of the charge air pipe, the comparative aluminum assembly would weigh about 30% more than the PPS product.

And then there’s cost: the manufacturing costs for the PPS pipe are about 25% less than the metal alternative.

What’s more, in addition to adding complexity to the design (i.e., parts consolidation is an important aspect of using plastic materials), which means that there can be component production with fewer steps (a complex plastic design vs. an assembly made of metal subassemblies that each must be individually produced and then assembled), Newill cites another manufacturing-related benefit: reduced scrap. He uses a water pump impeller as an example. “The involutes curves are difficult to machine, and you would throw away or try to recover a whole lot of scrap metal. The plastic can be molded into a net shape.”

As vehicles become more electrified, there are other characteristics of plastics that are beneficial. Newill: “Plastic is a natural insulator. Many things in the electronics industry are already made of plastics.” So as auto borrows more from that industry, plastics make considerable sense. “We’re not electric motor makers,” he says, “but we see our materials being commonly used in them.”

(He also points out that the engineering polymers are flame-resistant without halogenated additives.)

To be sure, this shift to the electrification of vehicles is not occurring because OEMs have a sudden interest in things Edisonian. Rather, it is happening because of the need—some of it consumer related, some of it mandated by regulation—to provide more fuel-efficiency and to reduce greenhouse gas emissions, with the U.S. market focusing on the former and the E.U. on the latter. Given the expense of electrification, there are aggressive efforts throughout the automotive community to reduce vehicle weight. According to Jeffrey H. Helms, Ticona global automotive marketing manager, “Cost is never going to go away, but weight is becoming more important because of fuel economy drivers.”

So if plastics can reduce cost—all-in costs, taking into account the manufacturing processes as well as the raw material cost—and weight, applications under the hood are as simply obvious as Newill indicated from the very start.