Gregor Hembrough is the head of Polestar USA. You might not be familiar with the company. That’s because it is three years old. What’s more, there is only one Polestar model out on the streets on the U.S. right now, the Polestar 1. It is a hybrid that produces 619 horsepower. It is structurally carbon fiber-intensive. It is a limited-production vehicle (1,500) and the North American market is allocated 150 vehicles per year during a three-year run.  And it costs $155,000. That’s why you’re probably not familiar with it. 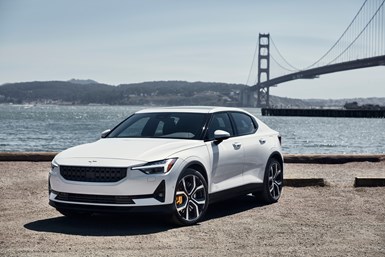 The Polestar 2. An electric vehicle with
Scandina-vian style. (Images: Polestar)

But Polestar has another vehicle that is available for order right now. Deliveries will start in September 2020. It is the Polestar 2. It is a fully electric vehicle (EV), not a hybrid like the Polestar 1. It has two electric motors and a 78-kWh battery pack. The MSRP for the Polestar 2 Launch Edition is $59,000. As a five-passenger sedan that is essentially constructed as a five-passenger sedan and not as an exotic supercar—although it does have a 0 to 60 mph time of 4.45 seconds and as “Autoline’s” John McElroy says, “It is wicked fast”—the Polestar 2 is something more likely to be found in ordinary garages than the sumptuous spaces where the Polestar 1 is undoubtedly housed. 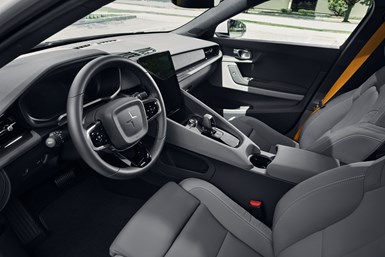 The standard interior of the Polestar 2 uses vegan materials. (Leather is an option, too.)

So what is it like launching what is arguably a new brand and a new car in the midst of a pandemic?

That’s one of the things that Hembrough talks about on this edition of “Autoline After Hours,” where McElroy and I are joined by Joann Muller of Axios.

Hembrough says that the Polestar brand has a built-in advantage predicated on its parent companies, Volvo Car Group and Zhejiang Geely Holding. Out of the box, it has the engineering know-how and economies of scale derived from Volvo. (The Polestar 2 shares the CMA platform that is also used for the Volvo XC40; both vehicles are produced in a Geely plant in Luqiao, China.)

On the show, Hembrough talks about the Polestar 2, explains why they are more interested in concentrating on what they are doing than in paying attention to Tesla, and discusses the likely growth of EVs in the market going forward.

In addition to which, McElroy, Muller and I discuss a variety of other subjects, including the vehicle subscription model that is being offered in select markets by companies including Porsche, Mercedes, Volvo (yes, there it is, again), and even Nissan.

We talk about how we might be witnessing an inflection point, as ExxonMobil is removed from the Dow after 92 years and petroleum companies across the board losing billions of dollars. Perhaps the EV phenomenon is going to become more of a reality.

And we talk about the market for 2020: Deloitte has found that 50% of new-vehicle buyers have decided to hold off of purchases, The Conference Board has found that consumers aren’t exactly regaining confidence, and used car dealers have found vehicle demand is through the roof while the supply is in the subbasement.

And here’s a link to “Autoline After Hours.”