While many automotive companies consider their suppliers of production equipment as, well, suppliers, sometimes referred to as “partners,” albeit partners that might incur a very serious financial penalty should the equipment they’ve provided cause downtime, Porsche and stamping equipment supplier Schuler AG have entered into a joint venture.

It’s called the “Smart Press Shop GmbH & Co.KG,” and the two companies have announced that they’ll start building it later this year in Halle an der Saale, Germany, which is proximate to the Porsche plant in Leipzig. It is expected to go into production in 2021 and will be staffed by 100 people. 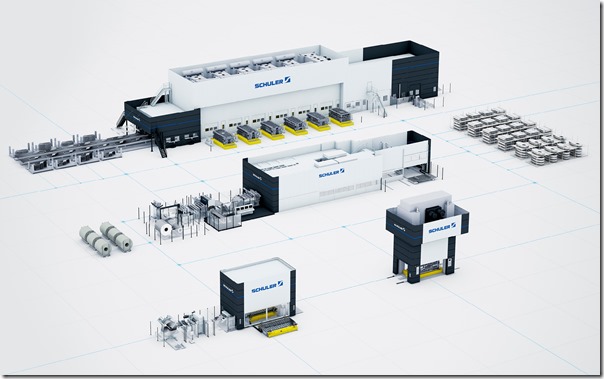 Elements of the Smart Press Shop

The Smart Press Shop represents an investment in excess of € 100 million by the companies.

Listen to Albrecht Reimold, Member of the Executive Board for Production and Logistics at Porsche AG: “Our joint venture marks a further major step into the future of sports car manufacturing.”

You’ve got to imagine that the people at Schuler are more than slightly proud that one of the world’s preeminent sports car manufacturers is giving them such cred.

It is probably even more engaging than Reimold’s. “In Schuler, we have found a highly competent and innovative partner which is setting standards in the digitalization of forming technology.”

According to Domenico Iacovelli, CEO of Schuler AG, “Our main focus is the cooperation with Porsche – an important premium customer for us with very exacting standards. At the same time, however, we regard the joint construction and operation of the Smart Press Shop as a project which will enable us to raise production efficiency and the digitalization of important process steps in car manufacturing to a new level for forming technology. Ultimately, other customers of Schuler will also benefit from this project.”