Although Porsche—like most OEMs—has been using additive technology to produce prototype components and the like, through work performed with supplier Mahle and equipment manufacturer Trumpf, it is using additive for pistons. 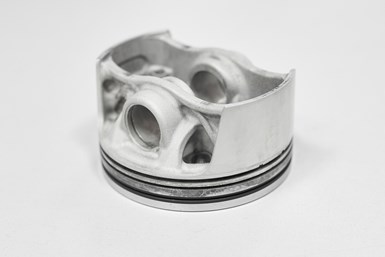 Specifically, pistons for the 911 GT2 RS—the flagship model in the 911 lineup—are being produced with additive technology.

This isn’t being done for purposes of saying that it is using a clever manufacturing technology.

Rather, it is being done because it is allowing them to get more performance out of the engine.

Says Frank Ickinger, who is with the advance drive development department at Porsche, “Thanks to the new, lighter pistons, we can increase the engine speed, lower the temperature load on the pistons and optimize combustion. This makes it possible to get up to 30 PS more power from the 700 PS biturbo engine, while at the same time improving efficiency.”

According Mahle, the pistons, which weigh 10% less than traditional ones in this 911 application, can weigh as much as 20% less. Not only is this predicated on the manufacturing process, but through the use of a design process that puts the material where it is needed to address load, specifically, not uniformly. 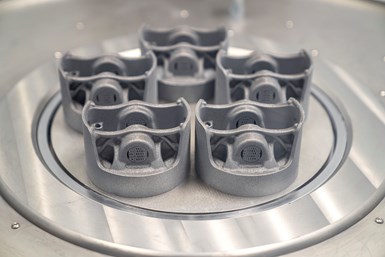 It takes about 12 hours to print the pistons.

As there was understandable concern regarding the quality and capability of the printed piston, Zeiss carried out non-destructive testing applications on the pistons, including CT scanning 3D scanning and microscopy. There were no issues.

In addition to which, six pistons were put into a GT2 RS engine and run under load for 200 hours on a test bench, of which 135 hours were full load and 25 hours motoring load. The test represented traveling 3,728 miles running at 155 mph.

Here’s an interesting observation that speaks to things far beyond this application with regard to additive. According to Steffen Rübling, project manager at Trumpf, “The project illustrates how 3D printing can be used to further improve components whose performance potential has already been exhausted by decades of development.”

In other words, things that have long been produced and thought to have been perfected (more or less) can still have significant gains achieved through alternative manufacturing processes, like additive.