Porsche Seats Get a 3D-Printed Structure

If you happen to be getting a Porsche 911 or 718 setup for track use later this Spring (and why wouldn’t you?), you may be among the lucky 40 who will be able to get your car fitted—and we mean precisely fitted to you—with what is being called by the Stuttgartians a “3D-printed bodyform full-bucket seat.” 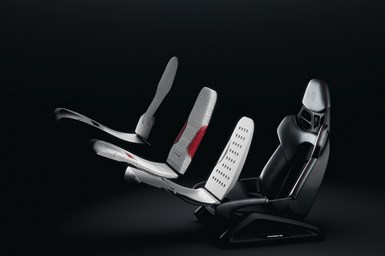 Porsche is offering seats that have a 3D-printed lattice layer that provides a customer-selected level of firmness: hard, medium or soft. (Images: Porsche)

Porsche is offering seats that have a 3D-printed lattice layer that provides a customer-selected level of firmness: hard, medium or soft. (Images: Porsche)

Explains Michael Steiner, member of the Executive Board for Research and Development at Porsche, “The seat is the interface between the human and the vehicle, and is thus important for precise, sporty handling. That’s why personalized seat shells customized for the driver have been standard in race cars for a long time now.

“With the ‘3D-printed bodyform full-bucket seat,’ we’re once again giving series production customers the opportunity to experience technology carried out over from motor sports.”

Well, that last bit is sort of true because the first 40 seats are going to be prototypes for use on European racetracks and used with six-point seatbelts.

(Guess we should have mentioned that in the first paragraph.)

The seat isn’t entirely 3D printed. The basis is a Porsche bucket seat. Then there is a sandwich construction, with an expanded polypropylene base support bonded to a layer consisting of a mixture of polyurethane-based materials; this is the 3D printed component and its function is to provide comfort.

The tailored part is that that comfort layer will be selectable: hard, medium, soft.

The seat is covered with a material called “Racetex.”

Because 3D lattice structures look cool, there are window panels in the seats that allow them to be seen by jealous competitors.

Because the 3D-printed lattice is visually fascinating, the seats have “windows” in the outer cover that allow a close look.

The driver’s seat (the passenger seat is not being made this way because when you’re racing you normally don’t have anyone in the other seat) will be available through Porsche Tequipment.

Then, come mid-2021, the company plans to offer the seats through the Porsche Exclusive Manufaktur, the company’s in-house aftermarket modifier.

Who knows where they’ll go from there?