Power of the People

He was at the plant site in Kentucky.

“I can distinctly remember walking rough mud pits on the plant site, with construction all around me.

“I thought to myself there’s no way in the word that’s gonna happen!

“But in May of ’88 the first Camry came off the line in Georgetown. I learned what a strong team of capable of and I knew I was a part of something special.” 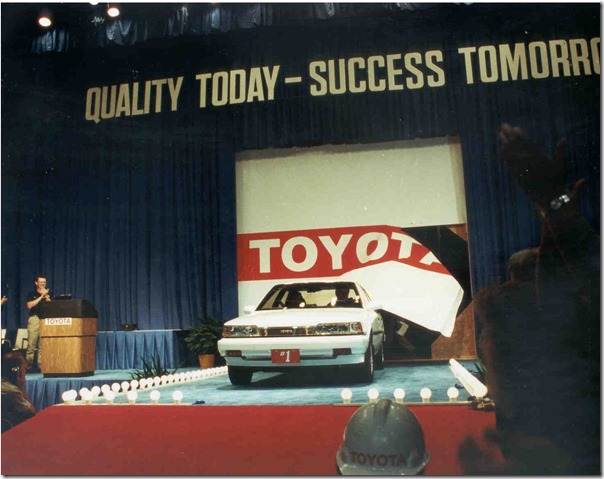 The first Camry produced at Georgetown

What didn’t seem in the least bit possible was completely realized. And the Camry has become a perennial number-one car in U.S. sales.

While there is generally a lot of concentration on things like materials and machinery—from composites to aluminum to ultrahigh strength steels, from laser welding to hot stamping to adhesive bonding—James makes another important point:

“You see, while advanced technology becomes more and more critical to our industry, and tooling and techniques evolve, at Toyota we still believe the single most accurate and valuable tool on our line continues to be the highly skilled, well-trained team member whose human senses help create a world-class vehicle.”

Sure, the technology is important.

But people are essential.

That’s a distinction that is often overlooked.