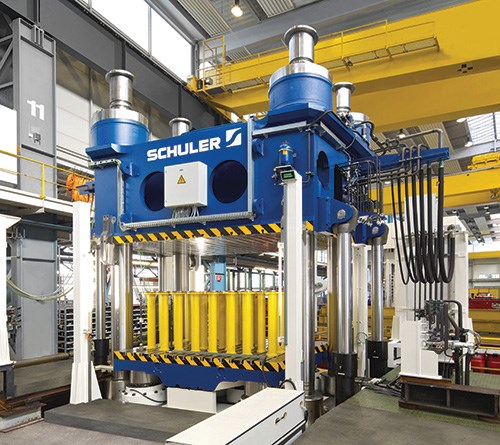 Although you might associate the name “Schuler” (schulergroup.com) with the manufacture of stamping presses for metal part production, the company recognizes that the auto industry is looking toward composite materials as alternatives to things like steel and aluminum.

And not only is it cognizant of this, but it is actually leading a project called “iComposite 4.0” that is focused on finding the ways and means to achieve economical serial production of composite parts. Also participating in the group project sponsored by the German Federal Ministry of Education and Research are the Aachen Center for Integrative Lightweight Production (AZL) atRWTH Aachen, Apodius GmbH, Broetje Automation Composites GmbH, Frimo Sontra GmbH, ID-Systec GmbH, the Institute of Plastics Processing (IKV) in Industry and the Skilled Crafts at RWTH Aachen, Siemens AG and Toho Tenax Europe GmbH.

One focus is on reducing material usage, given the high cost of the fiber-reinforced plastics. Another is decreasing cycle time. Both of these can be achieved by the production of near-net shaped parts rather than semi-finished components that may have as much as 50 percent trimmed.

They’re developing a networked production system for the production of the parts. It starts with additive fiber spraying, with strand orientation arranged to meet the finished part load requirements. During the injection of resin and shaping in the press, the die is actually deflected so that they’re able to modify wall thicknesses of the part.

An RFID chip is integrated into the part so that they’re able to have all of the production history monitored and stored. The goal is to achieve zero scrap.

The group thinks that through more efficient production, there is a greater likelihood of the proliferation of composite-based components.