The industry will come back. But no one really knows when.
#people #GeneralMotors

Q: “Do you think auto sales are going to get back to normal anytime soon, in the U.S. and globally?”

A: “We are seeing a recovery. We think it’s going to be a relatively short-lived recession. But we have a long way to go because we went to a pretty low base. The new outbreaks do pose potential setbacks, but we’re hopeful that the U.S. economy will be back to 90% of pre-pandemic levels early next year. There’s a lot of uncertainty.”

That is a Q&A between Tom Krisher (the Q) of the Associated Press and Mary Barra (the A), CEO of General Motors. 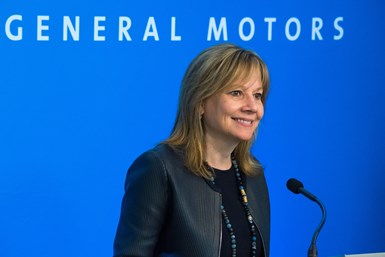 If nothing else, there is a bit of optimism to admire on behalf of Barra’s “a relatively short-lived recession,” although it isn’t exactly clear what it is relative to.

Then there was March.

“The economy contracted so sharply in March (the final month of the quarter) that in 2020 Q1, GDP [Gross Domestic Product], GDI [Gross Domestic Income], and employment were significantly below their levels of 2019Q4.”—NBER

So it could be that if we’re back to 90% early next year, it isn’t exactly going to be a “short-lived” recession.

Still, we can hope. (And wear masks, social distance and wash our hands.)

A recent article by three Deloitte analysts, “How the pandemic is changing the future of automotive,” data from the Deloitte State of the Consumer Tracker was used to underline some of the trends that are visible on the landscape right now.

There are three bits of data that I find to be most telling of what is going on:

No one anticipated COVID-19.

The fact that people are undoubtedly leery about getting into a vehicle that is being driven by someone they don’t know that probably just had someone sitting in the very seat that they’d get in that they also don’t know (things like the Lyft plastic dividers notwithstanding), this could mean some potential strength for vehicle sales: Deloitte research says that personal vehicle ownership is important to 74% of those in the U.S. What’s more, 56% say that they’ll limit their use of public transportation in the next three months—though I suspect that three months from now it will be another three months and then another. . . .

Q: “What shape do you think the recovery will take? When might the industry see recovery?”

A: “I wish that I had a crystal ball to know the exact shape and timing of the recovery.  In fact, no one knows how this will play out because no one knows the duration and severity of COVID-19 going forward.  But there are a few known facts.  First, global automotive demand had plateaued and started to decline prior to COVID.  Transaction prices have been growing faster than the level of consumer income.  Nearly 50% of consumers around the world are delaying purchase of the vehicles.  Most fleet buyers, with the exception of goods delivery fleets, have seen a decline in economic activity.

“There are other factors that may stimulate demand as consumers fear sharing a ride and may view a personal vehicle as a safer alternative.  We expect that there will be reversal or at least a pause in consumers' desire for access over ownership.  But due to job and financial concerns, consumers are more value conscience – resulting in an increasing demand for used vehicles.

“It is clear that the trends impacting demand for new vehicle ownership is creating severe headwinds that have not been fully realized.”

That is a Q&A between me (the Q) and Joe Vitale, principal, Global Automotive sector leader, Deloitte Consulting, and one of the authors of the article (the A).

Those headwinds he mentions seem to be something that we can’t see but will surely feel.

We all need to be positive—and pragmatic. We need to realize that this virus is not going to go away, and even if the number of fatalities decreases, if the number of cases continues to rise and there is a concomitant increase in hospitalizations, people who have an IV in their arms are probably not thinking about buying a new pickup.