Brad Keselowski, who drives for Team Penske in the Monster Energy NASCAR Cup Series, is taking what he’s learned about the importance of advanced technology on the track to  manufacturing.
#racing #EOS #GE

So far this year Brad Keselowski, who drives for Team Penske in the Monster Energy NASCAR Cup Series, has had three victories. Last year for the whole season he had three victories. And the same in 2017. So given that there are 23 more races between now and the wrap-up of the series at Homestead, odds are that Keselowski will chalk up some more victories.

Because he is fast.

But lots of drivers are fast. One of the things that separates Keselowski is that he sees speed as an important dynamic in manufacturing, so last year he established Keselowski Advanced Manufacturing (KAM) in Statesville, North Carolina, which is predicated on producing parts for customers (although it should be noted they also do design and engineering work) through a combination of additive manufacturing equipment and the latest CNC metal removal equipment in its 70,000-sq. ft. facility. 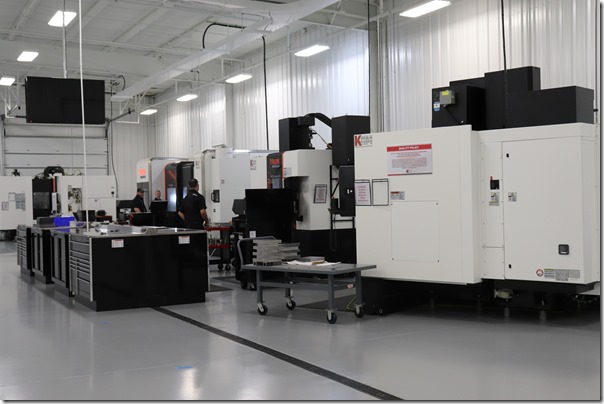 According to Keselowski, “We’ve moved really fast as a company. From the time we opened our doors a year ago to now, the momentum has never let up and I don’t expect it to any time soon. Our fast-paced growth and the investment strategies across all of our resources is laying the foundation for us to scale up in the additive industry on a level that no one in the marketplace has done yet.”

In the subtractive space there is an array of Mazak equipment including an Integrex i-300S multitasking machine, two vertical machining centers—a VCN-500C and a VC-500A—and a horizontal machining center, an HC 5000.

In addition to which there is a wire EDM machine from GF Machining Solutions.

And there is more equipment within the shop. When he was introducing KAM, one of the things that Keselowski said would set his facility apart from others is that as regards the components made with additive, “Engineering, design, manufacturing, intricate post-processing and finished product quality certification—we’re going to do it all, and doing it this way is a key takeaway from motorsports. Every day that an idea or a part is in someone else’s hands is a day lost to your competition and the marketplace.”

As mentioned, Keselowski races for Team Penske, and there is no one in the racing world—or almost in any other endeavor, for that matter—who is more methodical, detail-oriented and deeply committed than Roger Penske (whose team won its 18th Indianapolis 500 this past weekend, a record unlikely ever to be eclipsed).

Clearly some of that has rubbed off on Keselowski. And the speed, too.

[Incidentally: If you’re interested in advances in additive manufacturing, you might want to attend the Additive Manufacturing Conference, which will be held August 27-29 in Austin, Texas. Your can learn all about it here.]