The Range Rover Sport SVR is, apparently, an astounding vehicle. It has a 5.0-liter supercharged V8 that produces 550 hp and 502 lb-ft of torque that’s mated to an eight-speed ZF automatic; there’s permanent four-wheel drive and a two-speed transfer case. It has a top speed (electronically limited) of 162 mph. And it has a starting MSRP of $111,350. 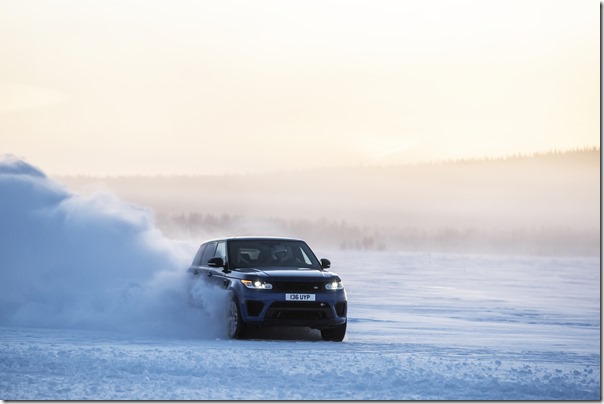 Now it is evident that the vehicle, curb weight of 5,148 pounds notwithstanding, is undoubtedly fast. According to Land Rover, the Range Rover Sport SVR—which was transformed from a regular Range Rover Sport by the company’s Special Vehicle Operations and which manifests visual exterior changes like trapezoidal air intakes in the front, revised hood vents, new fender with vents (there’s a lot of powertrain breathing necessary for a beast like this), quad exhausts, and a new rear spoiler—there is a 0 to 60 mph time of 4.5 seconds.

Lest anyone think that the Range Rover Sport SVR is simply quick on the pavement, the folks at Special Vehicle Operations took the vehicle to six places around Europe to see how the vehicle would perform—at speed—on various surfaces: grass, snow, gravel, sand, and mud.

The vehicle, it should be noted, has a Terrain Response 2 system, which allows the selection of various modes for the vehicle setup (e.g., throttle response, shift points, air suspension height): General Driving, Dynamic, Grass/Gravel/Snow, Mud and Ruts, Sand, and Rock Crawl. This can either occur automatically or the driver can select the mode via a rotary controller on the center console. It was fitted with Michelin 275/45 R21 All-Season tires.

Looking at those figures, one can only conclude that this may be the greatest understatement of all time: Driver Darren Jones, Stability Applications Leader, Jaguar Land Rover, said: “The Range Rover Sport SVR is famed for its on-road performance, but this hasn’t been achieved at the expense of customary Land Rover capability.”