Although there is plenty of Strum und Drang regarding some companies that are possibly introducing electric work trucks within the next few years, it is interesting to note that Daimler Trucks & Buses has been quietly and consistently working on a variety of battery-powered trucks of various configurations under its Mercedes-Benz, FUSO and Freightliner brands. 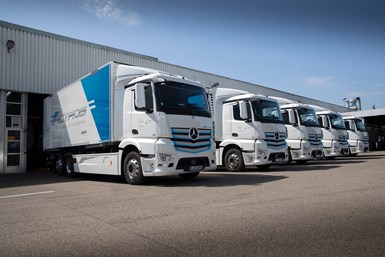 Part of the fleet of electric trucks from Daimler, these the eActros. (Images: Daimler)

It has announced that its customers around the world have accumulated more than seven-million kilometers in its electric transport vehicles.

What’s more, it intends to offer EVs in its major sales areas around the world by 2022:

While there is some question about the viability of some electric trucks coming to exist, it is worth noting that the Daimler eCitaro bus—which uses electric portal axles—the ZF AVE 130—with electric motors at the rear wheel hubs to provide a peak output of a combined 250 kW and is powered by lithium-ion batteries providing 292 kWh (an interesting aspect is that some of the battery modules are mounted to the roof) has been in series production since 2018.

According to Daimler, there are presently 170 eCanters being operated in Europe, Japan and the U.S. There are heavy-duty eCascadia and medium-duty eM2 test vehicles—a total of 38 units—in operation in the U.S. The eCascadia is to launch in mid-2022 and the eM2 later that year.

Martin Daum, chairman of the Board of Management of Daimler Truck AG, said, “With our electric trucks, we aim to offer our customers electric vehicles that are on par with conventional trucks in terms of availability and performance as well.”

While trucks coming from other marques may be somewhat in question, it seems unquestionable that Daimler is going to get the products on the road approximately when it has it will.

Idea: Global Sales: Not Bad (But Not Good, Either)

According to LMC Automotive, the global light vehicle sales rate was 88.1 million units in August, a 10.3% year-on-year (YoY) decrease. But as LMC points out, there was “a fairly strong August 2019.”

And most importantly for those who are looking at the sales trends: “Broadly speaking, the latest results are encouraging.”