While none of these developments appears to be as though they'd be out of place in a contemporary car, they are really rather extraordinary. More importantly, they are essentially doable from a production standpoint.
#Faurecia 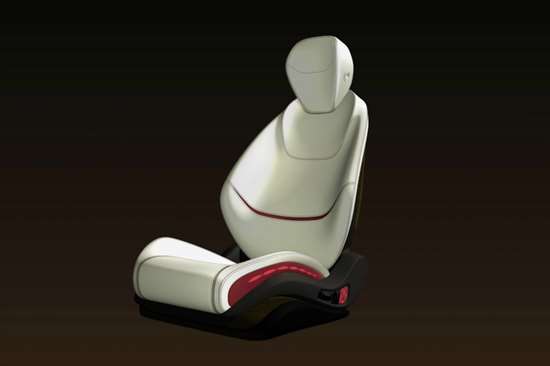 The Faurecia Sustainable Comfort Seat. The typical metal structure gives way to a composite structure, and in lieu of foam, a cushioning material like that used in running shoes is used.

While head restraints are often considered in the context of harmonious appearance and FMVSS meeting specs, they’ve gone further with this. That is, the black section shown here could be swapped out—either by the OEM or by the customer through aftermarket—with any number of things, ranging from a tissue box to task lighting.

And all of them can be addressed by...seats.

Whereas a conventional seat has a steel structure covered with foam, that's not the make up of the Sustainable Comfort Seat. It has a seat structure that is made of continuous fiber thermoplastic material. These are glass fibers in a polymer matrix. The material is layered, then compression molded. Through the use of biometric analysis, the shape of the seat is configured to accommodate the human form in a way, Kulkarni explains, that can't readily be achieved with steel members. He likens the seat form to that of a high-end office chair.

Because the seat structure is designed that way, they are able to reduce the amount of cushioning material required. Rather than using foam that is likely to end up in a landfill, they're using thermoformed structures that are made of the type of material that are used in running shoes. "Totally foam-free," he says. A twin-sheet process is used such that there is a formed in bladder that can be filled with air for lumbar support.

They've also engineered the seat so that not only is the position of the head restraint correlated with the position of the seat: as the seat is moved fore or aft, the head restraint, which has horizontal travel of approximately 14 mm, moves so that it can be in the right position for people between the 5th and 95th percentiles. In addition to which, if the seat is moved back, the cushions are coordinated so that the amount of overall travel is minimized so that there is no need for motors and associated wiring to make seating adjustments.

Seat head restraints (a.k.a., headrests) are not unlike the seats to which they are attached. Michael Miner, product line manager-Seating, Faurecia North America, explains that the typical head restraint has a U-shaped solid metal post that is covered with foam and fabric. While the heat restraint they've devised has metal posts, rather than a solid piece, they are using two straight tubes, thereby minimizing the overall use of metal. And there is an injection molded interior structural piece inside the head restraint.

In this design, the front of the restraint has a foam covering, thereby helping reduce the overall thickness by 20%. But the rear of the head restraint, which has long been essentially a blank slate, is engineered so that there is the ability to do various things. Essentially, there is a plastic piece that fits clam-shell like to the interior structure. It can be a plain plastic piece or it can have higher-level chrome accents. Or it is possible to use the interior space that is created so that there could be a tissue dispenser put in place or a dock for an iPod. Task lighting could be integrated. Miner points out that not only is this head restraint easy to assemble—snapping together—but there can be ready customization in the trim and final shop of the OEM.

Finally, there is the rear seat, which Miner says in a base sedan is "a wireframe weldment overmolded with a polyure-thane. It doesn't add any true value to the consumer other than that it is a cushion."

They looked at the conventional second-row seat and, as is the case with the Sustainable Comfort Seat up front, decided that the metal structure could be replaced with an injection molding. "Instead of a wireframe that we have to overmold with a lot of polyurethane to make it comfortable, in this case the frame can be molded to be comfortable right out of the gate." Which means that the amount of foam required can be greatly minimized.

But the molding approach can bring other things to the rear seat that have heretofore been unattainable given the foam-covered-weldment approach. That is, cupholders can be molded right in. There can be storage space under the seat cushions. Features can be molded into the base structure to facilitate trimming the rear seat for model differentiation.

Miner says that looked at from the point of view of piece cost, the injection-molded rear seat is neutral when compared with the traditional wireframe seat. But looked at as regards tooling cost—and he says "The tooling on a wireframe can push up toward $1-million"—they calculate that the molded seat offers a 40% reduction in tooling cost.

While there has long been an array of concept seats displayed at auto shows and in the showrooms of companies like Faurecia, according to Jay Hutchins, director of Marketing & Product Planning, Interior Systems, at the company, the difference today is that there are now production-proven technologies that can make the concepts realities.

Take, for example, the design of the composite back frame for the Sustainable Comfort Seat. Glass-fiber reinforced composite materials are certainly mainstream. The molding processes used are not exotic. But one of the tricky parts, Miner points out, was performing the finite element analysis modeling necessary to develop the shape with the necessary performance attributes. "There were no FEA models available when we started the project that mimicked a composite backframe. We had to create the FEA model and get it to correlate to the real world so that what you see in the model would be the frame in the real world. It was a huge breakthrough. Without these types of tools, it would have never been done."