Rather than storing hydrogen in a large cylindrical tank, Noble Gas has developed a conformal system
#safety

While gasoline as an automotive fuel seems to be losing ground when it comes to new developments, gas—as in hydrogen, for example—is gaining considerable ground. There is plenty of activity going on in this space, whether it is the second-generation Toyota Mirai or the Class 8 trucks that companies like Cummins and Navistar are collaborating on.

While there is considerable attention being paid to the development of fuel-cell stacks, Chris Kondogiani, principal, Noble Gas Systems, says, “We see a lot of forward-looking projections for hydrogen fuel-cell adoption. Our focus is on solving the hydrogen storage.” 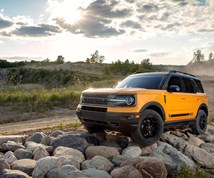 In most cases, hydrogen storage for vehicles are composite-wrapped cylinders. Often, there will be safety demonstrations that have someone firing a bullet at the tank and having it bounce off or otherwise not cause a catastrophic situation.

Kondogiani explains that the concern is with the “burst failure mode.” That is, if the bullet were to make it through the tank, there would be an instantaneous release of pressure, as the hydrogen within the cylinder is on the order of 350 to 700 bar.

An analogy is popping a balloon with a pin: BANG!

So Kondogiani and his colleagues at Noble are taking a different approach. They’re developing a high-pressure, lightweight storage (and delivery, because you need to get the gas out to power the vehicle) system that is conformable. 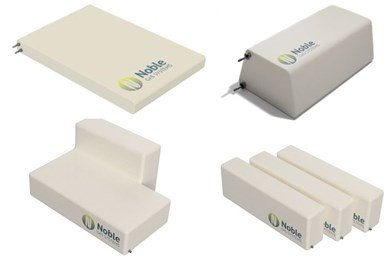 Each of these is a hydrogen storage system: the exterior package can be designed to accommodate design needs, while the interior system provides safe storage. (Image: Noble Gas Systems)

That’s right: rather than being a solid tank, the Noble Gas system has an extruded polymer liner that keeps the hydrogen from leaking out, a woven synthetic fiber reinforcement, and a plastic outer shell.

The storage system can be housed in a outer shapes of a variety of configurations because on the inside the hydrogen (or natural gas or other compressed gases) is stored in what appears to be a series of large straws that are connected together with U-shaped tubes.

Not only is this a light-weight assembly, but Kondogiani says that the configuration is one that avoids the burst failure mode because if there is a leak in one of the channels, it takes much longer for the energy to be released.

So to return to the balloon analogy, it is more of a long hiss than a sudden BANG!

Kondogiani says that when talking to OEMs, there are two issues that they need to have addressed when it comes to hydrogen storage for vehicles: (1) Safety, (2) Lightweight.

Given the design of the system they’ve developed, he says that they address both.

What’s more, he says that because of the design of the storage system, it can be designed to fit into areas of a vehicle without requiring a major redesign of the structure: the package can be just 3.1 inches wide. The storage systems can be fitted under seats or in the cargo area; they can be made compact and several can be deployed per vehicle rather than having a couple of larger structural tanks.

The company was established in 2017, so these are early days, with more development work to be done.

According to Kondogiani, the company has performed a proof-of-concept: they bought a Polaris Ranger ATV and retrofitted it with a fuel cell they borrowed. Then then integrated one of their storage tanks to show that it would function as required in the real world.

He says there are on-going discussions with OEMs as well as with potential technology partners that can help establish a more-robust supply chain for the system.

They’ll be doing additional advanced engineering work during the next 18 months or so, and anticipate a launch around the end of 2025. He points out that they’ve been working with certification groups from the start.

Does all of the attention on battery electric vehicles concern him? “They’re great in certain applications,” he says, but then adds, “There are other areas, especially medium- and heavy-duty vehicles, where fuel cells are more beneficial.”

He cites such things as hydrogen refueling time vs. charge time, and says that looked at from well-to-wheel, hydrogen is a green technology.

And conceivably, by providing a light, safe and design-flexible hydrogen storage system, the Noble Gas system will help facilitate the transition to hydrogen for transportation applications.