A clever approach to surface prep has been developed by ATI Industrial Automation: a robotic sanding device that features compliance, which allows it to be used in a variety of applications, including those where there needs to be work lightly performed. 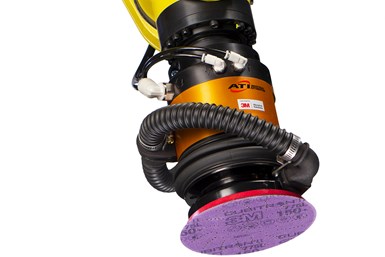 The AOV-10 end-effector can provide consistency in surface finishing due to its pneumatic compliance. (Image ATI Industrial Automation)

The AOV-10 Axially-Complaint Orbital Sander has a pneumatically actuated compliance mechanism that provides control of contact forces so as to achieve consistency in preparation from part to part. There is a double-acting motion that offsets the weight of the tool, which means that the same finish can be achieved regardless of the orientation of the tool on the robot arm (it can also be fitted to a fixture).

The robotic sander uses 3M abrasives. It can be fitted to a range of robot arms, from cobots to industrial robots.