IHS Markit has come out with its prediction for global light vehicle sales for 2018, which it forecasts to be 95.9-million units. Noted Henner Lehne, executive director, global vehicle forecasting for IHS Markit, “We expect 2018 will be yet another record-setting year for the global auto industry, up 1.5 percent from 2017.”

(In the U.S., however, the firm forecasts there will be moderation in demand, with sales volume to be 16.9-million units, down 1.7 percent from 2017.)

While the eyes of many are on the introductions that several OEMs have unveiled and will reveal this week at the North American International Auto Show in Detroit—sheet metal for consumers to put in their garages—there are a couple of factors that might have some changes on the market going forward.

For one thing, coincident with NAIAS is AutoMobili-D, a conference and exposition that is focused on topics including the connected car, autonomous driving and mobility services.

Odds are, for the foreseeable future, connected and autonomous vehicles—if for no other reason than the price of the technology required to provide levels of self-driving—will be not in private hands but in fleet operations (e.g., Lyft and Uber).

Here’s a data point: in late 2016 MIT’s Computer Science and Artificial Intelligence Laboratory released a study that indicated that 3,000 ride-share vehicles could replace the nearly 14,000 cabs in New York City and meet 98 percent of the demand with an average wait time of 2.7 minutes. That’s a non-automated vehicle that would carry more than one person. But I think that the point stands that when you have people like those at CSAIL creating algorithms to optimize vehicle use, the number of vehicles is likely to go down. 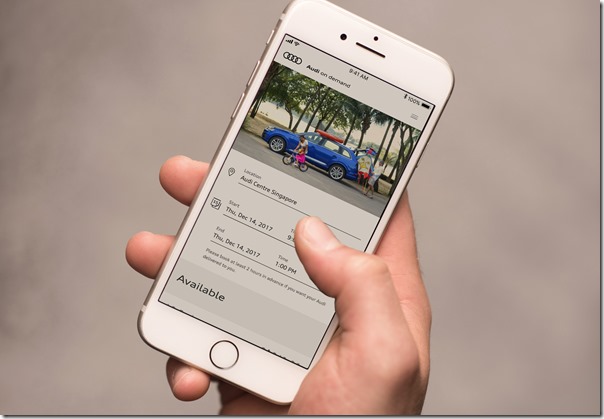 Then last week Audi announced that it is expanding its “Audi on demand” program to Singapore.

Through an app a user can book an Audi for from four hours to 28 days. The booking requires as little as two hour’s notice, and a concierge will bring the vehicle to any location in Singapore for the driver.

The package includes service, insurance and even a child seat if necessary.

Audi on demand has been operating in Beijing, Hong Kong, San Francisco, and Munich.

While it might be that part of Audi’s strategy might be along the lines of “If they drive that new Q5 they’ll want to buy one,” there is also the potential that this simply becomes a service business for the automaker. It doesn’t sell more cars but conceivably fewer. But it derives revenue from the service.

(And let’s not forget that (1) Audi isn’t the only company that is doing things like this, as, for example, Cadillac and Porsche have programs and (2) when it comes to ride-hailing and ride-sharing, General Motors has an investment in Lyft and operates Maven.)

It is likely that in the not-too-distant future, the sales number metric is not going to be the one that is most telling of the fortunes of an OEM.