Sales Stronger than What They Seem 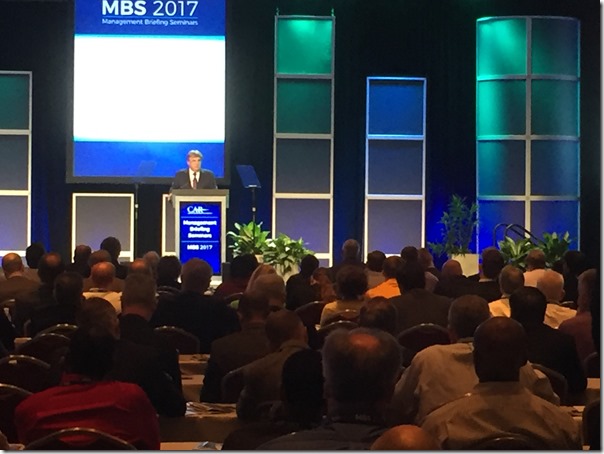 On August 2, Bob Carter, executive vice president, Sales, Toyota Motor North America, made the opening presentation at the CAR Management Briefing Seminar, and addressed the issue of sales, and noted that he saw a newspaper story that morning that included the verb crumble in its headline about July sales. (Overall sales were off about 7 percent from last July and 4 percent from June.)

Carter walked through the math and noted that the industry sold 1.415 million vehicles in July 2017 which calculates to a 16.8-million SAAR. And that in July 2016 the SAAR was 17.8-million.

While acknowledging that there is a softening, Carter said, “It’s still a 16.8-million market.”

And he suggested that if one thinks back not all that long ago in the industry, a 16.8-million SAAR would be the cause of extensive celebration.

Looking forward, Carter said that for the next 24 to 36 months there will be a plateauing of sales, which will be in the “upper 16-millions.”

But in Carter’s estimation, the auto industry is undergoing unprecedented change, not only in the sense that there is growing autonomy and electrification, but an array of competitors entering the market, the likes of which have not been seen in the industry—and he numbered companies including Uber, Apple, Google, and Amazon.

About the last-named, Carter noted that Amazon has set up Amazon.com/vehicles, that includes an array of car information and reviews, and Amazon.com/automotive-auto-truck-replacements-parts, which offer what its name implies. He added, “They’re not selling cars. . .yet.”

He went on to say that there are also considerations related to the burgeoning number of non-traditional technology suppliers that traditional OEMs have to learn to work with, if not completely partner.

Carter said that optimism is part of his DNA. And that notwithstanding, he sees solid sales going forward.