Nowadays, there aren’t a whole lot of chief engineers who get to do a sports car. Tetsuya Tada is one of the lucky ones, as he led the team on the Scion FR-S.
#Yamaha #engineer #Scion 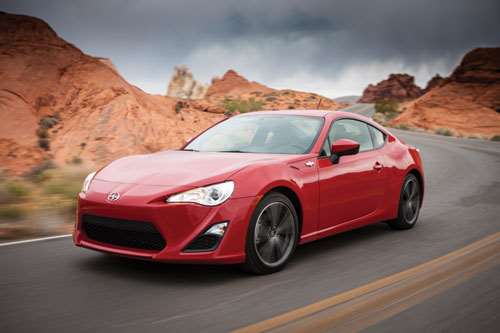 One of the considerations was making the car as light as possible. The curb weight of an FR-S with a manual is 2,758 lb. This was accomplished, in part, by the use of light-weight materials. For example, the hood is sheet aluminum and there is extensive use of high-tensile steel, such as 980-MPa sheet for the roof side rails, front header, and center pillar reinforcement, and 1,500-MPa hot-pressed sheet for the roof center reinforcement.

Tetsuya Tada, chief engineer for the Scion FR-S. He says, “Twenty or 30 years ago it might have been easy to make a sports car from existing parts—like from our AE86.” But given concerns with things ranging from fuel economy to mass market-penetration, sports cars—affordable sports cars—have gone by the wayside. The FR-S is the answer.

When the FR-S was being designed a Toyota 2000GT, which went on the market in 1967, was in the studio for inspiration, but not for copying.

This is the 200-hp, boxer-style four-cylinder engine with direct injection that’s under the aluminum FR-S hood. It is a joint development between Toyota and Subaru.

The observation made by Tetsuya Tada isn’t particularly surprising. And it expresses a sentiment that goes well beyond the engineering community at Toyota Motor Corporation. The man who has worked as a lead engineer on such projects as the first-generation Scion xB and the Japan domestic market Wish minivan says, “Almost all Toyota chief engineers want to do a sports car during their career.”