Rather than the standard black-and-white used to camouflage vehicles under development, SEAT celebrates its Catalan roots

For those who live in places like the greater Detroit area, it isn’t uncommon to see vehicles driving around with canvas covering the front and rear fascias and the body panels covered with black-on-white graphics of all sorts. These are vehicles-in-becoming and the purpose of the coverings is to provide camouflage (even though the coverings tend to draw more attention as in “What the heck is that?!). The canvas, of course, provides an opaque covering and disguises the headlamps and taillamps, both of which are becoming increasingly brand-specific. And the various black checks, swirls and whatnot are there to breakup the visual surfaces, to help disguise the bodylines. 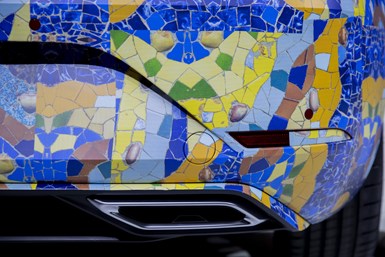 SEAT uses the trencadís approach in creating camouflage for the Leon. (Images: SEAT)

But leave it to what is arguably one of the most fashion-forward automotive brands in the world to be significantly more avant-garde in its approach to camo.

For the Leon, which will be unveiled next week, SEAT is using an approach inspired by its cultural ambience, as it is using what is called a “broken tile” technique, or trencadís in Catalan.

Jordi Font, head of SEAT’s Color&Trim Development, says of the approach they’ve taken for the camo: “The new SEAT Leon has a lot of personality and is very difficult to camouflage because it's a sculpture on wheels that expresses SEAT's emotional nature. The Leon was born here and because of the special relationship we have with Barcelona, we looked to the city for inspiration.”

So rather than going for the black-and-white approach, they’ve a wide range of colors applied. And rather than having a strict pattern (e.g., squares, lines, rectangles, paisley), the surface pattern of the 20 square meters of vinyl that is used for each Leon is more random. 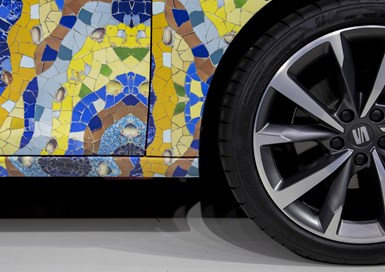 When you see a vehicle covered with any camo you’re likely to look. It would be hard not to look at the disguised Leon.

“This is the first time we didn't use conventional camouflage. It was a challenge, because the main goal is to distort the shapes of the car. We worked on several versions to blur the lines but send a clear message - that we are Barcelona, that we are Mediterranean, and that we are colorful. We want to give meaning to our sculpture” says Jordi.

Which goes back to the point that when you see a vehicle with camo—even if you have little interest in the industry—your tendency is to figure out just what it is. (And if you’re in the industry, you’re likely to really try to figure out what it is—perhaps driving much further than you’d intended to just to spend more time looking.)

Clearly the folks at SEAT Color&Trim are taking advantage of that interest and making sure that the curious will know they’re looking at a SEAT.