According to the U.S. Embassy & Consulate in Spain and Andorra:

In some regions of Spain, including Catalonia, local governments require the use of masks by everyone age six or older in enclosed spaces and public areas regardless of the ability to maintain social distance. The city of Barcelona is located in Catalonia.

And also located in Catalonia is OEM SEAT. 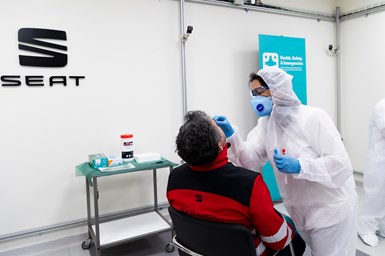 SEAT plans to give PCR tests to employees at the return from August holidays. (Images: SEAT)

There is a concern that there may be a second wave of COVID-19 hitting Spain. And complicating matters a bit is that there are summer holidays in August.

So it is notable that SEAT is preparing for the return of its workers.

It will carry out PCR tests for its more than 15,000 employees as the August holidays come to a close, “with a special focus on production line workers, temporary employment agency workers and suppliers.”

The plan calls for testing more than 90% of the workers in the focus group (approximately 8,600 people) the week before the summer break concludes on August 31.

Then the employees who are not involved in vehicle manufacture will be tested as they return to work.

Another interesting aspect of this testing regime is that they are going to have the tests run by labs approved by the Ministry of Health and the Government of Catalonia so that there will be no effect on public health activities. (As you may have heard, one of the concerns with testing of college students going back to school in the U.S. is that it would tax the already burdened test labs in the U.S. This SEAT approach is apparently aware of the conditions on the ground.)

And another thing the company is doing is continuing the practice of offering its employees free flu vaccinations, which it is moving up in time, to September, in part because according to the company “recent studies have shown that some proteins in this vaccine also act effectively to reduce the symptoms of COVID-19 sufferers.” (Another concern in the U.S. is that people will be reticent to go clinics or health care providers to get a flu shot, which could complicate the health conditions this Fall and Winter.) Yes, SEAT has the various protocols in place on the factory floor (masks, distanced workstations, temperature checks entering the facilities, sanitizing gel, and even a health self-assessment app).

(In case you are wondering, SEAT operates plants in Martorell, where the SEAT Ibiza, Arona and Leon models and the CUPRA Leon and Audi A1 are manufactured; a plant in Barcelona, where bodywork parts are produced; and the SEAT Componentes plant in El Prat de Llobregat, where gearboxes are assembled for both SEAT cars and other Volkswagen Group brands.)