People who are opposed to stricter emissions regulations, especially those who are over 60, may be interested in learning about a research study led by the Imperial College London and Duke University, funded by the British Heart Foundation—even healthy +60 people.
#emissions #sustainability

People who are opposed to stricter emissions regulations, especially those who are over 60, may be interested in learning about a research study led by the Imperial College London and Duke University, funded by the British Heart Foundation—even healthy +60 people.

The study looked at the effects of urban air pollution on cardiovascular and respiratory health, based on measurements taken of 119 volunteers that were over 60 and (a) healthy, (b) had stable chronic obstructive pulmonary disease (COPD) or (c) had stable heart disease.

It should be noted that Oxford Street has been known to crush the World Health Organization’s air quality limits, particularly for diesel particulates, and those particulates are primarily coming out of tailpipes. 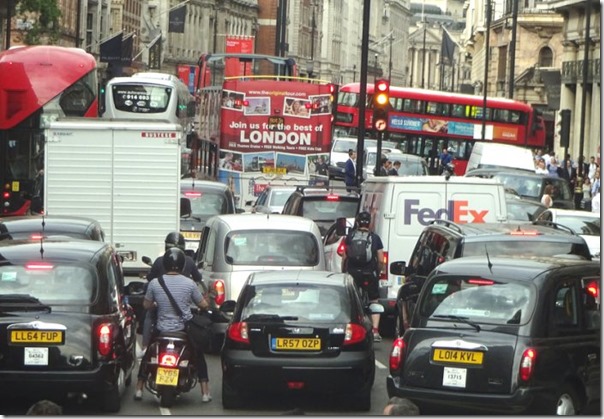 Participants’ vitals—lung volume, blood pressure, the degree to which blood vessels could expand—were taken both before and after the strolls.

The walk in the park resulted in improvements as in better lung capacity, reduced blood pressure and better arterial flexibility across the board.

After the Oxford Street walk each of those factors were far less (e.g., while arteries became less stiff by 24 percent in healthy people after the Hyde Park walk, the improvement was just 4.6 percent after walking on Oxford Street—and those are numbers for the healthy people: they were far worse for those with COPD and heart disease).

While walking is good, walking in polluted areas isn’t, according to the research.

Said Fan Chung, Professor of Respiratory Medicine and Head of Experimental Studies Medicine at National Heart & Lung Institute at Imperial College London, and the lead author of the study, “It is possible that studies such as this could support new air quality limits, it shows that we can't really tolerate the levels of air pollution that we currently find on our busy streets.”

It isn’t an issue of not being able to “tolerate” it as a cold might have it, but simply one of basic health.

And it is worth noting that according to the U.S. Centers for Disease Control and Prevention, heart disease is the leading cause of death in the U.S., accounting for one in four deaths annually.

And the CDC also notes that “Chronic lower respiratory disease, primarily COPD, was the third leading cause of death in the United States in 2014.”

Perhaps a deep breath needs to be taken before resisting emissions regulations.