Sergio Marchionne knew that it was important to be distinctive in the market. There were (and are) plenty of automotive companies putting out least common denominator products. Clearly, that wasn’t going to be the way that FCA would succeed.
#Dodge #Ford #FiatChryslerAutomobiles

One of the bigger criticisms of a new vehicle is that it is an “appliance.” No, this is not one of the new, contemporary productions of companies like Whirlpool, objects that appear as though they could be put in a gallery of contemporary art, but of the classic white enamel rectangles.

Chrysler had had a long history of not making appliances, whether it was the ’94 Ram pickup or the Viper or the PT Cruiser. Of course, in many instances, the vehicles that were moving out of Chrysler, Dodge, Plymouth, and Jeep dealerships didn’t necessarily have the sort of quality and reliability that made the Maytag repairman’s job easy. 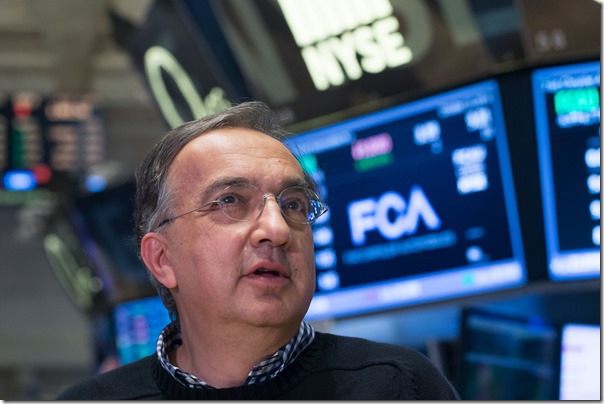 When Chrysler emerged from bankruptcy in June 2009, one of the organizations that put up funding to allow that to happen was Fiat. And so what is now known as “Fiat Chrysler” came to be. Some wondered at the time if this was going to be a repeat of DaimlerChrysler, which had a run from 1998 to 2007. . .and arguably contributed to the weakness at Chrysler, which facilitated bankruptcy.

Sergio Marchionne, who led the new company, facing the situation at the Chrysler portion of Fiat Chrysler, might have decided that going for appliances would be the thing to do. Forget about all of that innovation and stylishness. It would be undoubtedly safer to go with bread and butter—Wonder bread and butter. Move sheet metal of an undifferentiated nature in order to put black ink on the books.

But he didn’t. He knew that it was important to be distinctive in the market. There were (and are) plenty of automotive companies putting out least common denominator products. Clearly that wasn’t going to be the way that FCA would succeed.

It took guts to make that call. But he made it.

Jeep was transformed by having models—like the Cherokee—that, when launched, didn’t look like what people thought a Jeep was and there were new models created that might have previously been unthinkable (e.g., Renegade). The Charger and Challenger, which essentially got their looks in 2006, were amplified, not put on a back burner. Other OEMs abandoned the minivan. Chrysler designed and engineered the 2017 model that set a whole new standard. And there are other examples.

What’s notable in this context is that there were cars—the 2011 Chrysler 200 (the car of the legendary Eminem ad) and the 2013 Dodge Dart—which were styling hits, but which didn’t do well in the market, so rather than trying to milk sales, Marchionne allowed the plugs to be pulled just a few years into their runs—something unheard of by and large in the auto industry.

One of the characteristics that Marchionne was known for was wearing black sweaters, even in situations where other OEM CEOs would wear a suit or at the very least a blazer (Mary Barra is another exception). While this almost seemed like an eccentricity of some sort, one could make the argument that Marchionne understood a good part of the Silicon Valley mentality early on: there is the whole notion of “hacking” your outfits by finding an outfit and sticking to it (think Mark Zuckerberg).

And Marchionne understood Silicon Valley in another way, too: as his competitors invested billions into autonomous technologies, he essentially had the position that it would be more advantageous to wait for someone else to develop it, and then they could buy and deploy it. Then in 2017 Waymo came to call and a deal was struck to deploy test systems in Chrysler Pacifica minivans. And the number of Pacificas so equipped has grown to the tens of thousands.

Marchionne was a character. A character is someone who does things in a distinctive manner, in a way that sets them apart from the others. Through the years the auto industry has had characters, ranging from Henry Ford to Bill Mitchell to Bob Lutz. They believe in something and work to accomplish it, almost regardless of what anyone else thinks. They work hard. They are sometimes brash. They transcend others on the strength of their passion and commitment alone.

They don’t come around that often.

But when they do they make a big difference.

And it is sad when the industry loses one, as it did today.

Our sympathies to the Marchionne family—and to his extended family at FCA.