While no one knows what the future will bring, as Sheryl Connelly explains, it is better to anticipate what might happen than to be blindsided if you don’t.
#Ford #people

Sheryl Connelly works for Ford. She has been there since 1996. Yet there is something distinctly different about Connelly. Something that isn’t the case with—well probably anyone you know who has worked at a car company for 24 years.

Listen: “I’m always reticent to tell someone what I do because I know the response I will likely get: a snicker, a chuckle, a giggle. When people understand I am serious, they ask where’s my crystal ball or to read their palm or what are the winning lottery numbers.”

Sheryl Connelly is a futurist.

That’s right: she is in charge of Global Trends and Futuring at Ford. 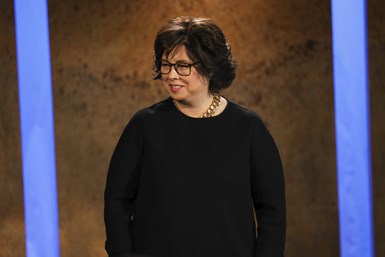 And let’s get this out of the way right away: “I can’t predict the future and beware of anyone who claims they can.”

No, Connelly can’t help you bet the trifecta.

But what she and her team can do is help anticipate different scenarios regarding what may happen, predicated on current trends as well as on possible changes.

“We can’t predict the future, but it doesn’t mean we can’t prepare for it. My job is to help the organization expect the unexpected.”*

How Did She Get There?

Connelly grew up in metro Detroit, the fifth of six children. Her parents were more focused on their children achieving financial stability than pursuing their dreams.

While Connelly had thought about studying art, her parents’ idea was at the back of her mind, so she went to Michigan State and received a degree. . .in finance.

She chose that discipline because she thought its specialization compared with other business disciplines would make her “irresistible” in the job market.

“So I did what every other unemployed college grad did. I went to law school.”

In addition to which, she spent a whole lot of time at University of Detroit Mercy because while she studied the law there by day, she went to business school at night.

She passed the bar and had an MBA.

“I practiced law for a minute. Long enough to know I’d made a really expensive mistake.”

Given all that, her next idea was to apply for a job at Ford. (When you grow up in the metro Detroit area, applying for a job at one of the car companies is just the sort of thing that one does.) She thought that she would be a good fit—finance, law, MBA—for the company’s tax compliance department.

She was called in for an interview.

“I thought I was being recruited for finance.” She wasn’t. “I was asked to come in and interview for a marketing, sales and service job. The next thing I knew, I was wholesaling cars to dealers—and I am not a traditional car person.”

A few years later, she was given the opportunity to join a team she didn’t know existed: Trends and Futuring.

“I tell people that was the day I won the lottery.”

See, even she can be surprised by the unexpected. Tracking trends to anticipate the future.

But while her path to where she is today may have had some twists and turns, she says that it was actually quite helpful for what she does today. The finance degree helps with business fundamentals. The MBA helps provide the context for applying those fundamentals in real life. The law degree taught her about doing research and the way to present information: “About building a logical, transparent point of view on why we believe something and why someone should pay attention.”

“The thing that was the most unexpected was what I learned from all of those years I spent wholesaling products to dealers. Month after month I would ask dealers”—and she says that they were “kind, patient and generous with their wisdom; they taught me basically everything I know about the auto industry today”—“to buy millions of dollars of products. After a few years, you could tell early on whether they were going to buy what I was selling. For my job today I am thankful that I can see if people are buying what I am selling. If they’re not, I have to pivot my pitch, so to speak.”

What Does She Do?

“We are constantly questioning the status quo. We are upending deeply held cultural values or institutional norms.”

But she emphasizes: “I do that through research.”

“So it is my job to remind people about the changing landscape of things we can’t influence.”

Connelly and her team look at the following categories:

“We may never be able to predict the future, but if we track the trends in those categories we’ll have a better line of sight to the forces that will shape consumer values, attitudes and behaviors.”

The research takes them, sometimes, far afield from what may be thought of as traditional automotive research. This can lead to insights that can have implications for Ford.

For example, she points out that “One of the world’s most competitive and largest providers of overnight accommodations owns almost no real estate.” Airbnb.

“If you were Marriott and you were only paying attention to Hilton, you would have been blindsided by Airbnb.”

And that’s what she doesn’t want to happen to Ford.

She helps provide some perspectives on the potential future. Or futures.

The future takes many forms.

Another thing that she and her team have been doing since 2013 is producing an annual trend book. In her introduction to the 2020 edition, she writes, “In the eight years that we have published this annual trend book, one thing has been consistent—the role of trust in society.”

She tells me, “Jim Hackett”—Ford president and CEO—“has this audacious vision that we’re going to become the world’s most trusted company. If we don’t understand what customers want, we’ll never operate in that space. Trust will be important with where we want to go with autonomous vehicles, electric vehicles, and connected vehicles that will use your data.

“Everything we do will demand we operate in a marketplace where the brand is trusted.”

In the 2020 trend book trust is looked at in depth; the section describing it is titled “Below the Surface.”

What is startling—remember, Connelly says that one of her roles is to question the status quo—is that there is a page showing a map of the world and circles over countries showing the percentages of people who agree with the statement:

“In recent years, it has become harder to trust what companies say and do.”

That’s right: Connelly and her team, using data sourced in 13,003 online interviews across 14 countries Australia, Brazil, Canada, China, France, Germany, India, Italy, Mexico, Saudi Arabia, Spain, United Arab Emirates, the United Kingdom, and the United States)—have not only determined that there are very tangible concerns being expressed by actual and potential customers, but are making this information public.

Which goes to the point of working to achieve trust, in this case through transparency.

There are also some findings that put words and action into some balance. They’ve labeled this “The Green Paradox.” People indicate what should be done. But they may not do it.

Or as Connelly puts it: “Concern hasn’t translated into action.”

Not Just Pointing a Finger

But Connelly and her colleagues are thinking about how to respond to their findings, too, not just presenting the data.

She points to the finding about driving electric vehicles, and first acknowledges, “There is still widespread misunderstanding about EVs.”

So let’s say that some of the misunderstanding is dispelled. There is still the issue of moving people to take action, as in actually getting and driving an EV.

“The easiest way to ignite action is to remove sacrifice. Not have an either-or option.” Mustang Mach-E. Not an either-or choice. Both.

To that point, she references the forthcoming Mustang Mach-E, which has the appeal and allure of being a Mustang, a range of some 300 miles, a starting price of $43,895, a crossover configuration, and a 0 to 60 time of ~3.5 seconds.

“You can have mileage and muscle. Not a tradeoff.”

Another labeled trend is “The Second Time Around.” Upcycling. Re-commerce. Previously owned.

On a global basis they found 60% of adults are more open to buying used goods than they were five years ago, 62% would rather buy used than new if the options are good and 53% agree “Buying a great item secondhand is trendier than buying a great item new.”

Which could be somewhat troubling for a company that manufactures new products.

Thanks, no doubt, to the Ford futurists’ findings, Connelly says that at Ford, “We’re not just thinking about the first-generation owner, but the second, third, and fourth.” Consider, for example, over-the-air updates that provide new functionality to vehicles.

She notes that they’ve been offering upgrades to the SYNC entertainment and vehicle information system for a number of years (SYNC was launched in 2007), and now they’re making the upgrades more seamless and taking the longevity of the vehicles into account, as well.

“In any organization, like automotive, where there are long lead times and large capital investments, when we make these longer-term plans it is based on a set of assumptions about how we think the future is going to play out.

“It is my job to slow down the conversation long enough to say, ‘What are the underlying assumptions and what if they turn out to be wrong?’

“I never do this in the vein of trying to convince someone their point of view is wrong, but to talk through the consequences.”

*Although when we talked it was before the extensive countermeasures had been taken across the U.S. to address the COVID-19 pandemic, Connelly was aware of the virus and described a scenario that could have rolled out as a result of it. She knows her stuff.