Although this may appear to be a rather sophisticated video game, it is actually what’s claimed to be the “world’s first vehicle dynamics grade” driver-in-the-loop (DIL) simulator for doing things like creating chassis setups.
#TriumphMotorcycles #engineer

Although this may appear to be a rather sophisticated video game, it is actually what's claimed to be the "world's first vehicle dynamics grade" driver-in-the-loop (DIL) simulator for doing things like creating chassis setups. 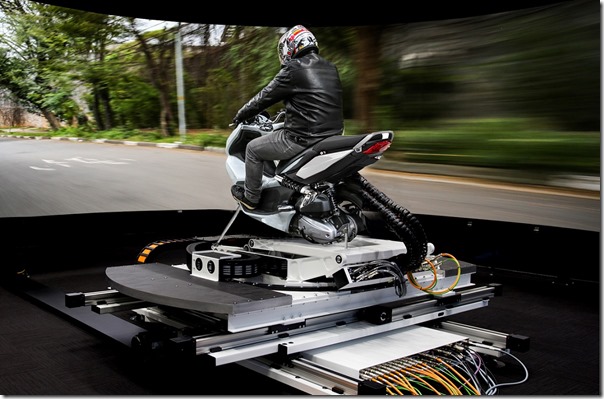 No, not Nintendo by a long shot.

Explains Chris Hoyle, technical director of rFpro, the British software supplier for the simulator, “Simulating the dynamics of a motorcycle accurately is incredibly challenging due to the mobility of the rider and the unique steering characteristics of the vehicle.”

Realize that unlike in a car, where there is a series of mechanisms between the steering wheel and the vehicle’s wheels, the steering of a motorcycle has more direct input.

What’s more, Hoyle points out another challenge of an accurate DIL simulation for motorcycles: “A car driver is restricted by the windows, bonnet and roofline; he can look around freely, but only upwards and downwards through a range of 20-30 degrees. The motorcycle rider can look anywhere, even down at the road surface, and once banked into a turn, because the rider is still upright on the motion platform, the horizon must be banked over to provide the correct visual cues.”

So the graphics system needs to be somewhat more robust.

The systems integrator for the development of the simulation setup is Ansible Motion.

Why do simulation—for cars or motorcycles? The reasons are various, including: the abilities to go to the limits of handling safely, to quickly evaluate different chassis setups, to test without physical prototypes, and to run tests 24-7, no matter what the weather.