The intersection of smartphones and vehicles is growing, as OEMs add all manner of capabilities to their vehicles so that the phones can do more than provide a means by which Apple CarPlay and Android Auto are brought into the cabin. For example, last week when Lincoln unveiled its Corsair compact CUV one of the features that was highlighted is “smartphone as a key,” which is exactly what it sounds like: The fob can be left on the kitchen table and the phone allows unlocking, starting and driving. What’s more, this digital “key” can be shared with other people (e.g., spouse, offspring) and then, perhaps just as importantly, taken back from those with whom it has been shared. 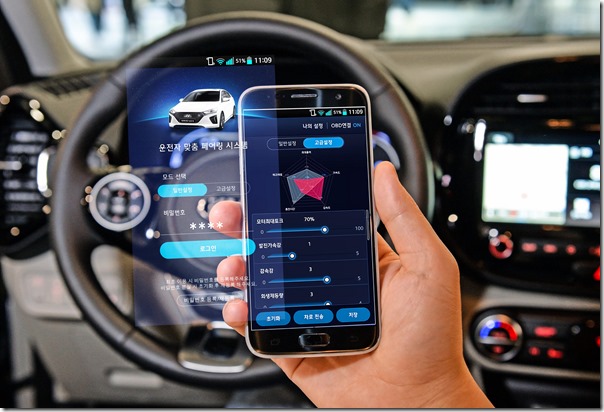 Perhaps getting a bit ahead of the curve, Hyundai Motor Group (as in both Hyundai and Kia) has announced that it has developed what it claims is a first: “smartphone-electric vehicle pairing based performance adjustment technology.”

Which is a long name for the ability to use a smartphone and adjust operational parameters of an electric vehicle (EV), not simply a vehicle that one might own or regularly operate, but a rental, as well. This is said to be an industry first. (Given the comparative small number of EVs in rental fleets or otherwise, there probably hasn’t been much of a market pull for this tech.)

Through a smartphone a driver can adjust seven performance parameters: maximum torque output, starting, acceleration and deceleration abilities, amount of regenerative braking, maximum speed, responsiveness, and energy use of the climate control.

What’s more, it will be possible for a user to download the parameters from another driver. (All personal information is said to be protected through the use of blockchain technology, so whatever else may be stored in one’s profile will not find its way onto someone else’s screen.) Hyundai will also make recommended settings available for specific conditions and routes, including optimized settings that make into account the state of charge and the destination.

Hyundai Motor Group plans to have 23 EVs deployed by 2025 on a global basis. This tech will be made available in some, if not all, of them.