The latest version of Solid Edge blows away the archetype for CAD packages by providing CAD, CAE, CAM and more for both mechanical and electrical design.
#Google #Siemens 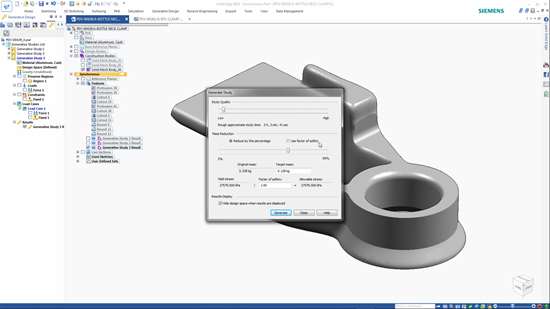 Generative design in Solid Edge 2019 can be applied to all designs regardless of the manufacturing process. Dialog boxes help designers define material, design space, permissible loads, constraints, and target weights.

“When talking about next-generation design, you can’t be talking about history-based modeling because that’s not next-generation,” says Dan Staples, vice president of product development for Siemens PLM Software. This was his introduction when debuting Solid Edge 2019 (solidedge.siemens.com), a full suite of design products for small- to medium-sized companies. In this new version, Solid Edge covers mechanical and electrical computer-aided design (CAD), finite element analysis (FEA) and simulation, subtractive and additive manufacturing, data management, technical publications, and a cloud-based collaboration portal.

No wonder Staples says, “Solid Edge is way more than a CAD system.”

The last version of Solid Edge, nicknamed ST10, introduced convergent modeling, which lets users incorporate triangular mesh (facet) models into their boundary representation (B-rep) solids. The result: The two modeling methods were no longer in separate worlds. Solid Edge 2019 goes the next step: Applying feature-based designing to mesh models. Add to that Siemens’s synchronous technology, which combines “the best of history-based and direct modeling,” says Oliver Duncan, product manager of Solid Edge design products for Siemens PLM. This leads to, which is in the 2019 package, synchronous mesh modeling. Now users can work with mesh geometry, such as face selection, delete, cut, copy, paste, and attach, just as they do with standard B-rep geometry. “You’re probably thinking,” continues Duncan, “`This doesn’t look special; it looks just like any other B-rep model.’ That’s exactly the point. It should feel like that.”

This latest version also has control over material structures, so generative design can now be applied to all designs regardless of the manufacturing process (such as machining and casting). Designers can create organic lattices and strut-type topologies in whatever parts and products they’re working on. They can also try out multiple load cases to individual generative designs for design optimization.

Enhancements to 2019’s core CAD functionality include an auto-simplify feature that removes details of a design. The end result speeds up the display of large-design projects and helps protect intellectual property. The new version also has analytic face recognition (e.g., planar or cylindrical), which can be used in downstream assembly mating operations.

Manufacturing costing has been added to sheet metal design. This tool accounts for the number of bends, cuts, and stamping operations, and gauge in a sheet metal design—in real time. Pie charts showing the proportion of these costs aid in design evaluations, such as the economic tradeoffs in using a particular gauge of sheet metal to match design goals. These pie charts update as the design changes and property changes roll up into the 3D model.

Solid Edge has had simulation and analysis for years, such as static stress, buckling, and thermal analysis, all based on FEA technologies like Femap and NASTRAN. The latest version builds that all in—not just built-in FEA, but also embedded computational fluid dynamics (CFD). FloEFD lets engineers analyze problems such as fluid flow and thermal management (including steady-state heat transfer and thermal stress analyses).

Free surface simulation is also included in 2019. This lets engineers analyze liquids sloshing around in a tank to determine whether baffles are needed. The simulation lets engineers compare the two designs side-by-side—with and without baffles.

The best of the rest

In Solid Edge Technical Publications, documentation and marketing specialists can set up interactive 3D views of parts and assemblies. A new storyboard wizard automatically creates step-by-step processes from exploded views. These views and other documentation can be exported as 3D PDF or HTML 5 for web-based viewing. All these publications are associative; they update when a design changes.

And what’s new software without cloud-based collaboration? The Solid Edge Portal brings “death to e-drawings; death to downloading viewers,” says Duncan. It also brings secure mark-up and data sharing to native Solid Edge data, JT files, and practically all other 2D/3D CAD data files. Continues Duncan, “Manipulate views, explode parts out of the assembly, section through in multiple directions, markup, make notations, scribble some notes—that’s all saved in the tree along with the rest of the components in the tree.”

Not a Solid Edge customer? Just Google “Solid Edge portal” and then create an account. Stresses, Duncan, “it’s free” (up to 5 GB of file storage).

Not bad for, as Staples, says, the “next-generation mechanical design today.”