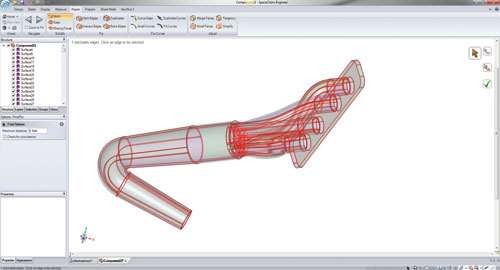 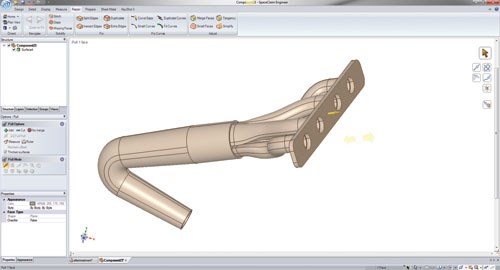 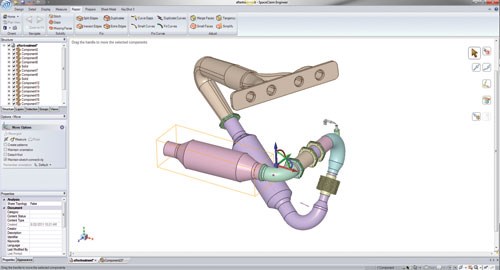 This sequence of three images show a manifold imported from a STEP file. As sometimes happens, the faces are disconnected because no topology information was included in the imported file. (Parts can also be misaligned because they were modeled by different people in the design chain.) SpaceClaim automatically identifies and closes the gaps. The result is a “water-tight” model. The last image shows the results of the same clean-up operation applied at the assembly level.

“There are a heckuva lot more people who want to use 3D and interactive 3D models than there are using them currently,” says Justin Hendrickson, product manager for SpaceClaim (Concord, MA; spaceclaim.com). The reason for this, he posits, is how parametric and history-based computer-aided design (CAD) systems are designed and function. He says parametric CAD “is useful for doing very complex and highly organized tasks, but it’s the wrong product for basic engineering.”

SpaceClaim Engineer 2012 might very well be the right product.

In general, direct modelers such as SpaceClaim are straightforward and simple to use, which is a good thing for occasional CAD users. According to company officials, 70% of SpaceClaim’s customers learn the CAD system without any formal training. This plus the lower cost of the software, again claim company officials, makes the total cost of ownership for SpaceClaim less than 50% that of traditional CAD products. How is this possible? Start with usability. Selected geometry is now more obvious. “Mousing” around a model causes the geometry underneath to automatically brighten. Clicking selects the highlighted item or items. Granted, highlighting can become a distraction, too. To avoid that, SpaceClaim monitors the speed of the cursor as the user sweeps across a model. Above a certain threshold, the highlighting stops. Highlighting appears again when cursor movement slows. Simple stuff like this makes SpaceClaim easier to use, especially with large models.
New tools for repairing 2D and 3D curves help when converting existing drawings and wireframe data to solid models. For instance, SpaceClaim can automatically fix the gaps between small, segmented curves and leftover segments in an imported geometry. There’s also a sketcher that works without constraints or rules. Instead, it performs dynamic inferencing. That is, the sketcher looks at how the geometries to be changed interact with neighboring geometries, and then modifies the items accordingly, such as tangents, trims, and curves. These sketches can then be pulled into 3D shapes. Designers interact directly with a sketch—no design history needed.
Another bit of automation can clean up and replace facetted and triangulated geometry with high-quality surfaces, such as curves, splines, cylinders, cones, and planes. This helps when working with STL files, which can act as an intermediate file format between third-party CAx products. It also helps when importing geometry from SketchUp, the on-line 3D CAD system from Google (sketchup.google.com). In both cases, designers can work on the imported geometry directly and immediately.
SpaceClaim 2012 can also double as a JT editor. The CAD system can even export product manufacturing information (PMI) to JT files. So, rather than keep a master JT file and create new ones as changes are made, designers and engineers can open the JT file, read all the tolerancing and dimensional information, make changes to the geometry, and then save all the changes and additional PMI right back into the JT file. In fact, SpaceClaim can run as a batch file translator. “You could, say, take a hundred Catia files and export them directly to JT files,” explains Hendrickson.

SpaceClaim’s sheet metal module handles mitered flanges, faster unfolding,
weld tabs, plus there are improvements in identifying and working on sheet metal features. Designers can create chamfers based on an angle and setback, rather than two setbacks. In fact, chamfers are a good example to demonstrate SpaceClaim’s usability, explains Hendrickson. “You can grab a chamfer, find all the chamfers of the same size, and then move them—all with one click. Or take all the same-sized chamfers, use the pull tool to modify or change the size of the chamfer, or remove it entirely. Again, one click.” Designers can also create their own custom forms, gussets, hinges, and double-walled designs. Dynamic links help synchronize folded and unfolded versions of a metal part design.
A new “smart” tool in SpaceClaim recognizes standard-sized holes in imported geometry, as well as recognizes chamfers, counterbores, and countersinks. A designer can create standard holes based on the hole dimensions in the imported geometry, or match the holes to a table of standard sizes. (Designers can create their own tables.) Designers can then modify the associated properties to match some other value from a standards table. “In four mouse clicks, you can import a design, recognize there are 20 number-8 holes, and then change them to number-10,” explains Hendrickson.
Users can also pop up a new tab that shows context-sensitive properties of an object. This is “similar to picking an image in a [Microsoft] Word document or a table,” continues Hendrickson. All of these properties can be edited. For instance, a designer can change the shape, type, and size of a counterbore—or switch it from an independently specified hole to one matching a standard size. All of this can be done on imported models; that is, imported “dumb” geometry that did not contain the counterbore dimensions.
And therein, for about $2,500, lies SpaceClaim’s raison d’être. As Hendrickson puts it, “It’s not so much planned design, but use what you have and here’s a tool to work with that.”