Spot the Audi as You WFH

Show off your car-spotting chops with this list of Audis in movies, from E.T. to Spiderman. . .
#Audi

Let’s say that you’re working from home. Further, let’s assume that there are kids around who are looking for a bit of a distraction.

Well, assuming that they’re as enthusiastic about autos as you are, then perhaps you can give them what can be considered the “Spot the Audi Movie Challenge.”

Audi has provided a list of its vehicles that have appeared in movies since 1982 (when there was an Audi 5000 in E.T., the Extra-Terrestrial).

So you can pick movies from the list and have your kids watch them, shouting out when they spot the Audi. 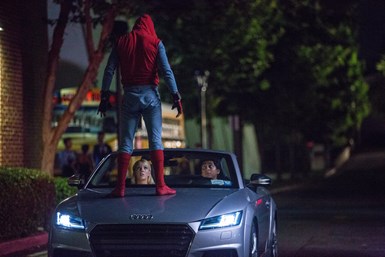 Who is that on that Audi? (Images: Audi)

Or you can use the list—admittedly, this is a bit of a cheat—and watch the movies with your kids (when you are off the clock, of course) as you amaze them with your ability to ID the Audis.

Either way, you can get hours of viewing pleasure with a slight automotive twist.

4. 2003, TT Roadster, Legally Blonde 2: Red White & Blonde. (Bonus fun fact: the TT is painted Candy Blue, a color Audi developed for the film—then decided to use as a production car color, too.)