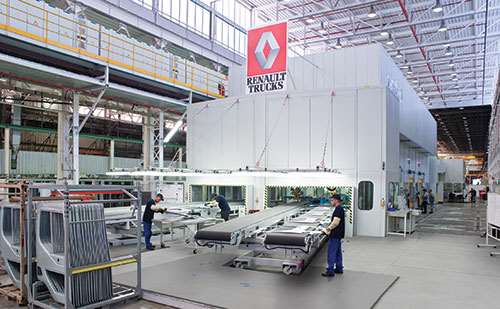 “Renault Trucks can use both the existing dies of an older press line and specially developed dies for the production of the new truck cabins,” says Dr. Martin Habert, managing director of Schuler SMG and head of Technology, Field Hydraulic Presses (schulergroup.com).

He’s speaking of what the French manufacturer has done in its stamping operations, driven by the need to develop a new lineup of vehicles to meet Euro 6 emissions standards for trucks, which go into effect January 1, 2014.

In all, Renault Trucks is using more than 80 different die sets to produce the cabs for its range of trucks in its plant in Lyon. The new system from Schuler—a blank loader, a 2,000-metric ton hydraulic press, three 1,000-ton presses, and material-handling automation—allows die set and tooling changes in less than five minutes. “This makes producing even the smallest batch sizes both simple and economic,” Habert says.

The line can operate at up to 11 strokes per minute, and as two parts can be made in tandem, that’s 22 parts per minute. The bed-slide surfaces are 4.1 x 2.5 m.

In operation, fanning magnets are used to separate the blanks so a robot picks up one blank at a time to place on a conveyor. An optical centering station determines the position of the blanks on the conveyor so that the press-loading robot is able to appropriately locate the blank in the die of the lead press for deep drawing. Schuler Crossbar Robots are used to move the stamping between the subsequent presses. These presses help minimize the overall length of the line.

Overall size was a key consideration. According to Schuler, the press line was tailored to the size of the Renault Trucks stamping hall.