Which material is the “most sustainable”? Well, much of that has to do with what and how you measure it.

If there’s one thing (and it may be the only thing) that the aluminum and steel industries agree upon, it’s this: We’re leaving the steel era and entering an age of automotive material options, where there are combinations of different materials, not just one dominant material.
#Audi #Tesla #Chrysler 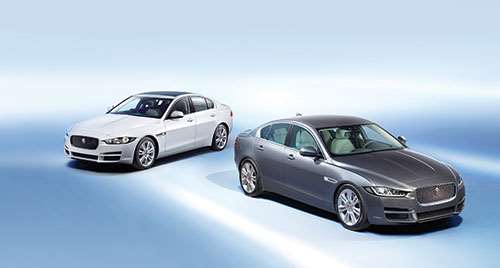 Although the 2015 F-150 is known for being an aluminum-intensive vehicle, Jaguar has long been building aluminum structures. The XE is a prime example of its execution in aluminum.

If there’s one thing (and it may be the only thing) that the aluminum and steel industries agree upon, it’s this: We’re leaving the steel era and entering an age of automotive material options, where there are combinations of different materials, not just one dominant material. Just how long this era lasts, and ultimately how sustainable it will be for the planet, are among the many other points of contention.

The 2015 North American Light Vehicle Aluminum Content Study, researched by the consulting group Ducker Worldwide (ducker.com), estimates that aluminum sheet for body and closure parts will reach 4-billion pounds by 2025. By then, aluminum hood penetration will reach 85% and doors will reach 46%; complete bodies will reach 18%, from less than 1% today. This year, vehicle aluminum con-sumption will increase by 28% over 2012. That would set a record . . . by about a billion pounds.

What’s driving the push toward aluminum versus steel is hardly a mystery. By the 2025 model year, federal Corporate Average Fuel Economy (CAFE) standards will require 54.5 miles per gallon for fleets, with light trucks required to reach 32 mpg. That means the average vehicle will need to shed between 150 to 200 pounds from today’s levels. And the generally lighter weight aluminum will help OEMs who would otherwise choose steel, to think twice.

Also by 2025, the EPA will require cars and light trucks to achieve a combined average of no more than of 163 grams of CO2 per mile, compared with 225 for the 2016 model year. That breaks down to 143 grams of CO2 per mile for cars, compared with 225 for the 2016 model year; and 203 grams per mile for light trucks, compared with 298 for 2016. And it is in the light-truck space where the weighting war will see its fiercest skirmishes. After all, the place to make up the most weight, and therefore the most CO2 (at least from the tailpipe), is in larger vehicles; and that means pickup trucks.

Leading the way is the best-selling vehicle in North America: The 2015 aluminum-bodied Ford F-150, the first truck body to go fully aluminum. The F-150 contains about 1,080 pounds of aluminum, with sheet and closures making up half of the content. Inside of 10 years, a combined 500,000 pickup trucks, cars and electric vehicles will have complete aluminum bodies, according to the Ducker report. And by then, every major automaker will have an aluminum body program, making Ford, General Motors and Fiat Chrysler becoming the biggest users of aluminum sheet in North America. The Ducker report also forecasts that in 2025, three out of every four pickup trucks will have an all-aluminum body.

The F-150 may be the best known aluminum skin, but aluminum now adorns the Audi A8, Jaguar XJ and XE, the Range Rover and Range Rover Sport, and the Tesla Model S. And while the F-150 retains a separate steel ladder frame, the 2017 Jaguar XE sedan’s complete body structure will be 75% aluminum.

In the provocatively titled report AutoBody Warfare: Aluminum Attack, the trade association World Steel Dynamics (worldsteeldynamics.com) makes the case that while the aluminum companies and their allies “are in an ebullient mood,” the party won’t last long. (It also sees the claim that three fourths of the light trucks by 2025 will have aluminum bodies as “far fetched.”)

But WSD takes direct aim at aluminum’s biggest environmental strength: that it’s lighter. A 10% weight drop will cut, on average, only 6 to 7% in mpg, the report claims. The biggest gains, the trade group says, will come through lower displacement engines that will nevertheless deliver on ever-present demand for increased horsepower.

By 2021, new advanced, high-strength steel products will be ready for adoption by design engi-neers eager to shed both pounds and costs, the report notes.

“Once automotive design engineers decide to redesign steel-intensive vehicles from the ground up, they will implement sizable and relatively low cost weight savings with advanced high-strength steels. The savings in the body-in-white may be sufficient for the design engineers to decide to utilize lower cost, although heavier, closures made from steel.”

Drive Aluminum (drivealuminum.org), the Aluminum Association’s Aluminum Transportation Group, disputes that powertrains will end up achieving the required fuel
economy gains, and the automakers will amp up aluminum content in C, D and SUV segment vehicles as a result. In a recent study, the group claims that aluminum reduces vehicle mass 25%, cutting the use phase’s energy consumption by 20% and CO2 emissions by 17%. But in that study, only one vehicle is examined in depth.

The Life Cycle
For years, the two industries have consistently traded study for study, claiming theirs is the most-sustainable material from a life cycle perspective. That means from cradle to grave, or from production, to on-road use, to end-of-life—or the recyclability of the metal. Given the dueling industry studies, how do OEMs and suppliers determine which is the “greener” product?

One well-respected standard for measuring the impact of a number of materials, is the Greenhouse Gases, Regulated Emissions, and Energy Use in Transportation Model (GREET), developed by Argonne National Laboratories. Using the GREET standard, high-
strength steel is the clear winner, at least when it comes to the energy consumed in initial production and the greenhouse gases created as a result.

For a 1 kg of primary aluminum ingot, energy consumption is calculated at 149 megajoules and 10 kilograms of emissions. Using secondary sourced aluminum, there’s a big drop to 13 megajoules and 0.9 kilograms of greenhouse gas emissions, according to GREET. (But there are questions about how easy it is to obtain reused aluminum—more on that below).

Gregory A. Keoleian, Director of the Center for Sustainable Systems School of Natural Resources and Environment at the University of Michigan, has developed many life-cycle models and authored dozens of studies on how to assess complete energy and greenhouse gas impacts. He’s used those models to research things like the benefits and drawbacks of organic versus conventional food, or assessing energy footprints of products like washing machines. He’s also explored plug-in hybrid electric vehicles versus traditional internal combustion engine cars—and even when it makes greener sense to keep driving an old car compared with buying a new one. And, of course, he’s analyzed high-strength steel and aluminum from both economic and environmental perspectives.

Keoleian doesn’t weigh in on which is the “more sustainable” metal. He indicates that both aluminum and high strength steel applications can enhance sustainability. There are simply too many variables, he says, particularly when it comes to the sourcing of metals, for an across-the-board ruling.

There’s little debate that aluminum is lighter, and therefore makes the use phase of the vehicle cleaner for miles per gallon. But that’s only one phase, and depending on the vehicle, it’s not always the most energy intensive period compared with the combined production and the end-of-life stages.

“Primary aluminum production is a very electricity intensive process. If the electricity for smelting is sourced from coal plants the greenhouse gas reduction benefits from light weighting will be offset significantly,” Keoleian said.

In a 2010 study, Keoleian and other authors looked at the energy required (and the energy conserved) when recycling the high-strength steel and aluminum, and forming it into a new body panel. After the steel vehicle is scrapped and it’s magnetically separated from the other shredded materials, it can be reused in body steel or other components relatively easily. Of course, aluminum is recycled as well, but generally that aluminum will go into a cast product, often with less capability or durability than auto sheet. That ultimately means a greater percentage of primarily sourced (instead of recycled) aluminum must be used in vehicles compared with steel. Compounding those issues is the fact that there’s less of an
infrastructure in place to get it back into a next-generation vehicle, the study showed.

“That’s important for the future as aluminum-intensive body materials are retired and need to be processed,” Keoleian said.

The debate over the life cycle may well be secondary to the tailpipe, at least for now. The current regulations do not focus on the energy inputs to produce cars or to recycle them, just the CO2 they emit. But future regulations might integrate life cycle in addition to, or possibly in place of, CAFE standards for vehicles.

“To really address climate change we do need to look at policy that can address complete life cycle carbon emissions, instead of just the use phase of products,” Keoleian said. “And that means going beyond just the fuel economy or the energy use requirements for things like home appliances.” He added, “The Obama Administration’s Clean Power Plan is focused on reducing carbon emissions from electricity which can also reduce production stage impacts from vehicles. Those policies will help address impact in these other situations.”