Steps to Get Back Into Production

The Sevel plant in Atessa, Italy, a joint venture operation between FCA and PSA where commercial vehicles are produced, went back into production today.

The plant had been closed on March 17. 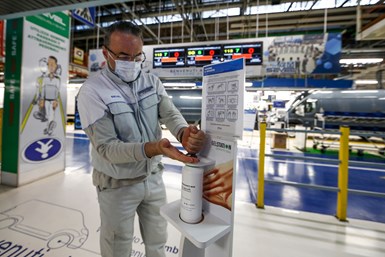 A sanitizer station at the FCA-PSA Sevel plant in Italy. (Images: FCA)

Among the things that were done to prepare for the re-launch:

Additionally, before returning to work, all Sevel employees were sent a WhatsApp link and an email with a link to a webpage that explained what measures were required, including videos.

Among the points covered are social distancing (a minimum of one meter), how to properly wash hands with soap and water or hand sanitizer, instructions about refilling a cup or water bottle from public dispensers, and rules for cafeteria use and meetings. What’s more, they were provided with information about how to ID COVID-19 symptoms and what to do in case of an emergency.

Pietro Gorlier, COO for FCA's EMEA region, said: “At the Sevel plant in Atessa today, we have demonstrated that protecting our workers is our main priority.”

Welcome to the new normal.

Keep This In Mind

There was one thing that they did at the Sevel plant that is very important: Each employee was given a kit containing surgical masks, gloves and safety glasses. These packs will be replenished daily.

But what’s important is what is also in the pack: a sufficient number of masks so that employees who commute to and from work via public transport will be able to wear a mask during transit.

One of the victims of the pandemic is the public transit network around the world.

It is all too easy to forget about those who rely on buses and subways and trains to get to and from work. In the absence of those modes, the difficulty of getting to the worksite can be insurmountable. And when they do make it onto a bus, they need to have PPE, not only for themselves, but for all of their coworkers.