Steve Miller says that when he began his career at the auto industry at Ford back in the late ‘60s, he and his colleagues on the finance staff in the Glass House would perform product analyses, looking at everything from product attributes to price to sales. Report after report after report.

Miller acknowledges that back then their attention was basically focused on three things: Ford’s products, GM’s products, Chrysler products.

“We ignored the Japanese entirely.”

How things have changed.

Miller is now the president and CEO of International Automotive Components Group (IAC), a Tier One supplier that provides an array of interior products, including instrument panels, consoles, door systems, headliners, and more. IAC has more than 50 plants around the world, positioned within 100 miles of the customer plants they serve because as Miller explains on this edition of “Autoline After Hours,” not only is timely delivery something that is essential for suppliers to perform—he notes that they have a facility that suppliers instrument panels to the Volvo plant in Gothenburg that gets a notification four hours of what color and configuration and model IP is necessary to be delivered in that time window—but simply makes sense when you’re delivering things like IPs, which are rather large and don’t lend themselves to being packed tightly for shipping. Miller also notes that whereas back in the day OEMs were all about price when it came to dealing with suppliers, now quality and reliability are key considerations, as well. 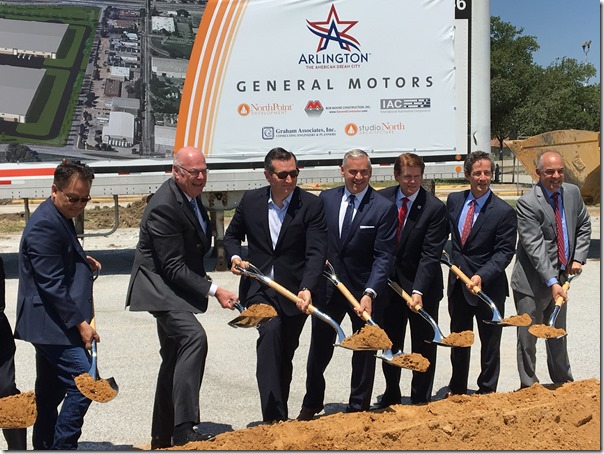 Steve Miller is second from the left. The man to Miller’s left is Senator Ted Cruz, and the man to Cruz’s left is Steve Kiefer, GM senior vice president of Global Purchasing & Supply Chain. The groundbreaking, at the GM supplier park in Arlington, Texas, is for a 500,000-sq. ft. plant that IAC is building to produce complete cockpits for vehicles that GM builds in Texas, including the GMC Yukon, Cadillac Escalade and Chevy Suburban.

Miller has had—and continues to have—a deep career in automotive. After Ford, he was recruited to Chrysler by his former Ford colleague Lee Iacocca. At Chrysler, Miller was instrumental in orchestrating the financing that the company needed to keep from bankruptcy. And while on the subject of bankruptcy, Miller helmed Delphi Corporation and led the restricting of the company when it went through bankruptcy (Delphi filed in 2005; Miller was there from ’05 to ’09).

He knows both sides of the industry well, the OEM and supplier side of things.

He shares his insights with Autoline’s John McElroy, Todd Lassa of Automobile Magazine and me throughout the entire hour of the show.

Other topics that are examined are Ford’s plan to essentially forego cars for trucks; Tesla (is there any topic in the auto industry that’s talked about more?); and the implications of autonomous vehicles, not only for the design and engineering of vehicles (if they’re running 10x more than ordinary vehicles do, isn’t there the likelihood that they’ll wear out 10x faster?) but even for suppliers like IAC (Miller says that they’re looking into a number of factors for automated vehicles, including materials that will be able to handle shared use of vehicles (after all, as he points out your personal vehicle is as clean inside as you want it to be, but should you be using a shared vehicle, you are exposed to what the people who had the car before you consider to be clean) and even how to manage the possibility of people who are facing rearward in a vehicle getting car sick (they’re testing aromas that might counteract the nausea).