Structural Engineering the 2021 Lexus IS

The compact sport sedan from Lexus is not just track-tested, but track-developed
#Toyota #Lexus #HP

“What we had foremost in mind in developing the new IS was to make it a car that excelled in communicating with the driver regardless of the road conditions or driving situation. We aimed to make the new IS a Lexus compact sports sedan that provides high-quality riding comfort while offering a high level of vehicle control.”

That’s Chief Engineer Naoki Kobayashi of Lexus International on the 2021 IS. 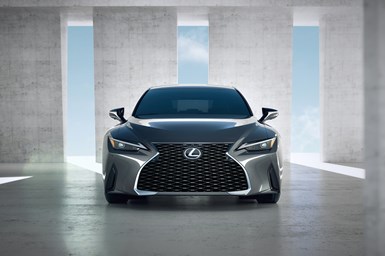 2021 Lexus IS. Designed and engineered to be driven hard. (Images: Lexus)

To be sure, there are engineering facilities of an ordinary sort.

Then there is the Toyota Technical Center Shimoyama, which was opened in 2019.

Sort of think of it as a Japanese version of the Nürburgring Nordschleife, where Akio Toyoda has spent hours improving his driving skills.

Shimoyama is a 3.3-mile test course that includes a ~250-foot elevation change as well as an array of curves, corners, and road surfaces.

Which brought the engineers to the point of body rigidity. They increased it through means including reinforcing the radiator side supports, increasing the number of front-side-member weld points, and optimizing reinforcement structures from the C-pillars to the sides of the roof. A solid structure provides massive benefits.

And on the subject of mass, they greatly reduced it in a number of ways, even small ones like using hub bolts to secure the wheels to the car. This was something they learned from the Lexus LFA.

The use of hub bolts was a two-fer in that they increase the fastening strength and consequently have the rigidity that is required for hard braking and handling, but there was an elimination of two pounds of unsprung weight.

And following that path, they reduced mass in the suspension through the use of coil springs that are 20% lighter than the outgoing model’s; A-arms produced from a forged aluminum that makes them 18% lighter than the steel arms they replace; and a new suspension stabilizer bar that provides a 17% weight save. 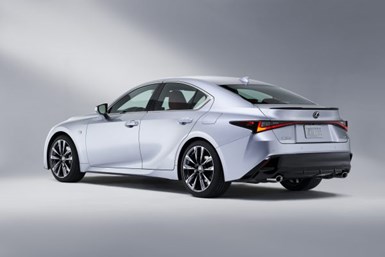 (For those of you wondering what powers the 2021 IS:

There are three engines: