Suppliers Face a New Challenge (A Good One, This Time)

Life as an automotive supplier is not for the faint of heart. The gyrations and various calamities experienced over the past decade could fill a book—experiences that most choose not to relive. 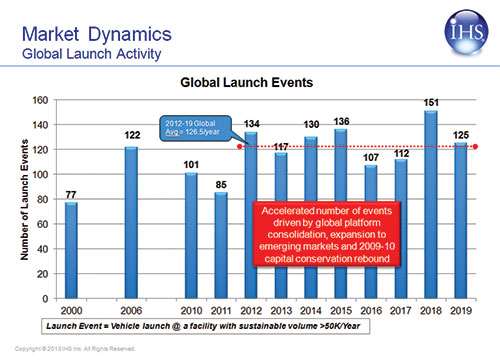 Life as an automotive supplier is not for the faint of heart. The gyrations and various calamities experienced over the past decade could fill a book—experiences that most choose not to relive. Through the automotive recession of 2009, suppliers were looking to shave capacity, pare overhead, and reduce fixed costs to the lowest possible level to weather a storm which no one knew how long would last. To add insult to injury, two of their largest OEM customers were moving swiftly through bankruptcy proceedings to pare their own debt and high fixed-cost levels. Nervous banks and getting paid were also issues to contend with.
From the depths of the automotive recession, the strong and swift to act survived. Enduring a North American light vehicle build rate of 8.6-million (when it averaged over 15.5-million for the prior decade) leaves an indelible impression upon even the most optimistic executive. It has been a difficult rise back to the 16-million unit production range. We left behind an industry and framework which most hope will never be repeated.
This year, North American light vehicle output is slated to reach or match levels experienced at the mid-point of last decade. While the route to today’s accelerated production levels has not been as difficult as the route downwards, there are challenges nonetheless. OEMs are seeking to meet strong domestic demand as well as export needs for vehicles built in North America. They are constantly pressuring suppliers for increased supply at competitive prices closer to the final point of use. An interesting dichotomy now exists—the shoe is now on the other foot. Suppliers are in the driver’s seat. Adding capacity and choosing which programs to invest in now is not the fait accompli it once was—most suppliers understand this new-found leverage and are employing it to shape their business.
Smarter suppliers are using the current environment of extreme capacity utilization (running at 91% of straight-time capacity in 2013) to mold their business and weed out low margin/high maintenance programs. Despite this new ability to pare their portfolio, challenges are abound. Stiffening emissions and safety legislation, expansion of global platforms to more regions (stretching existing resources), consumer pressures driving higher content, and the constant drumbeat of lightweight solutions all inch suppliers to the edge every day.
One more challenge has quietly emerged. An aligning of the planets with respect to the number of product launches through the balance of this decade has reached unprecedented heights. The combination of a dearth of launch activity during the lean recession years, an expansion of capacity to several growth markets, and the condensed cadence driven by global platforms is proving difficult for suppliers to grapple with. Striking a balance between adding internal resources to support R&D efforts as well as the accelerated volume of launches in North America and on a global scale adds another dynamic. There will be over 500 launch “events” from 2012 to 2016. An “event” is launching a nameplate at a plant with a sustained volume of more than 50,000 units per annum—essentially causing suppliers and OEMs to tool for production. This heightened event level is spread over more regions as global platform launches expand their footprint. Once OEMs would launch a nameplate in one market, then, six to nine months later, in another. This meant that it could take up to three years for a nameplate to be launched globally. Now they’ve cut that time between countries to two to three months. This impacts everything from R&D to tooling. Going forward, the timing is going to be condensed even more. Which increases risk.
Many may understandably not reach for a tissue to weep for the supplier community given the state of capacity utilization and profitability. Though the challenges are different, these are good problems to have. We’ll kindly leave the automotive recession in the mirror and face these new hurdles with a smile.
Michael Robinet has been a managing director of IHS Automotive Consulting since 2011. Prior to that, he was the director of Global Production Forecasts for IHS Automotive. His areas of expertise include global vehicle production and capacity forecasting, future product program intelligence, platform consolidation and globalization trends, trade flow/sourcing strategies, and OEM footprint/logistics trends.