The company is now 30 years old. As it goes into its next 30, Taisuke Nakamura is leading the design challenge.
#Nissan #people #Infiniti

Taisuke Nakamura is standing in a temporary building in Sierra County, New Mexico, a facility housing two of the concept vehicles that Nakamura, now head of Infiniti Design, was instrumental in creating. There’s the QX Inspiration, an electric SUV that was revealed at the 2019 North American International Auto Show in Detroit. There’s the Qs Inspiration, an electric sedan that the company first displayed at Auto Shanghai 2019. Both of these vehicles are strong signifiers of Infiniti’s electric future. 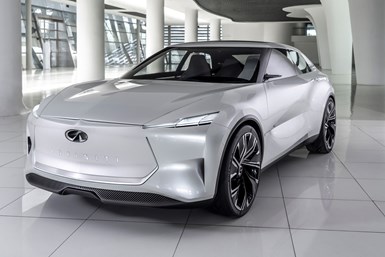 This is what the future looks like at Infiniti. (All photos: Infiniti)

And speaking of the future, that explains why Nakamura is at a place that’s 35 miles southeast of Truth or Consequences, New Mexico (yes, the biggest burg in the area), a site that’s adjacent to the U.S. Army White Sands Missile Range.

Nakamura is at Spaceport America, the place from which Virgin Galactic will launch commercial flights into space. (The 12,000-foot runway outside is providing an opportunity for some existing Infiniti vehicles to run at speeds that the New Mexico State Troopers might otherwise take exception to.)

Nakamura has been with Nissan Motor since 1993. He joined the company right out of Kyoto City University of Arts. He says his degree is in product design because the school didn’t offer a transportation design curriculum.  He says, however, that on a weekly basis a designer from Daihatsu came to the campus to teach car design to the interested students. Of which he, of course, was one.

His career began at Nissan proper, both in Japan and Europe, and had a stint with Infiniti in the early ‘00s, then back to Nissan. . .until gaining his present position on September 1, 2019.

Although he once thought about designing motorcycles, he is completely integrated into car culture. And one of the reasons: he likes “the size of the object to design.”

Although the Qs Inspiration is a sedan, it has an elevated driving position which makes it somewhat in keeping with the trend toward crossovers without going all the way to the full ground clearance mode that’s characteristic of the QX Inspiration. The QX Inspiration is a midsize SUV that’s based on a new platform. This helps accommodate a large capacity battery pack (one of the things they’re trying to emphasize is that there need not be range anxiety) as well as an electric all-wheel drive system, with drive motors on each axle (and another aspect of the Infiniti brand is performance).

About them, Nakamura says, “Those two vehicles are good expressions of where we are headed.” Yes, they are concepts. But yes, Infiniti plans to electrify itself for its future, so the work that they’ve done on those vehicles are likely to find realization in production vehicles in the not-too-distant future.

The approach on the exterior design of both vehicles is one that can almost be characterized as being “hygienic,” in that there are clean surfaces and straight lines—although there are sharp forms that bring to mind origami. One of the Japanese concepts that inform the designs of the vehicles is that of Ma, or the art of empty spaces. 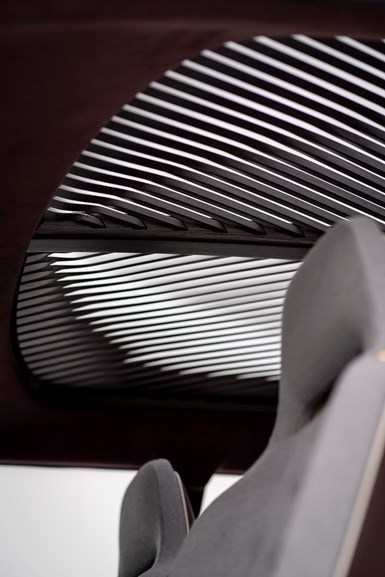 Wood is used on the headliner, forming an interesting light structure in the QX Inspiration cabin.

“We want this to be other than geometric machinery. It is more of a human-centric approach to the body surfaces.”

Another thing that the form language takes into account is the fact that whether it is a sedan or an SUV, whereas historically Infiniti vehicles have had a prominent hood, so as to emphasize the power provided by engine beneath it (i.e., size = power), what they’re doing with the architecture of the EVs is moving the cabin forward.

So, he explains, rather than having a large grille as required for cooling a large engine, there is but a small slit for the EV. “We still try to maintain our personality at the front end,” he says, adding, “We retain a hint of the double arch.” 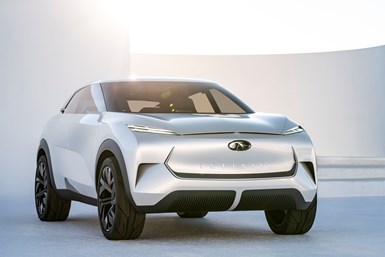 As an electric vehicle, the need for a large air-grasping grille gives way to what are essentially slots in the front fascia.

But there is a clear recognition that an electric vehicle just isn’t a vehicle that happens to have a different propulsion system beneath the skin; the design language says that it is something else entirely.

Outside and the Difference Inside

Exteriors are exteriors. There are only so many ways the sheet metal can be formed and folded. But inside it is a different story.

The electric vehicle—sedan and SUV alike—allow for a flat floor. Which provides space.

“We want to make the experience seamless from going from one’s home into one’s vehicle.” Which means that they’ve developed the cabins—especially for the QX Inspiration—to be lounge-like. The seats are absolutely like furniture more than they’re like traditional automotive seats. What’s more, there is an extensive use of cloth materials in the cabin, including on the instrument panel that has dot quilting, which is evocative of a couch.

There is red cedar wood. Leather. There is a Bianco Carrara marble center console. 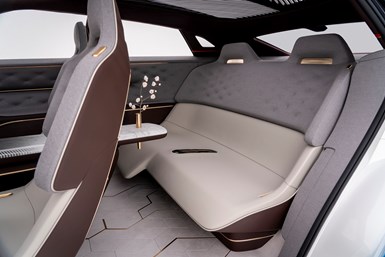 Note how the rear seat in the QX Inspiration is more like a couch than a bench seat.

Lighting is used to enhance the interior environment, with the option of four different colors: wakanae, a soft green; torinoko, a pale yellow; akebono, subtle pinks and reds; and shirafuji, soft purple.

But as this is a 21st century vehicle, it is fully equipped with electronics on the inside, but from a visual point of view, Nakamura says, “We wanted to make it as minimal as possible; we wanted to integrate the high technology and blend it naturally into the interior rather than making it a focal point.” There is, of course, the obligatory giant display screen that extends from one side of the IP to the other, but it is assistive in presentation rather than being obvious. “Integration is key for us,” Nakamura says, adding, “We’re working toward a more human-centric way to express the technology.” One of the drivers for the exterior and interior designs is a recognition that there is a changing pattern in the choices that people have for meeting their transportation needs, whether this is ride-hailing

or subscription-based short-term use. Nakamura says that for those who choose to own a vehicle, there must be something special about it. While that may have long been the case, particularly in the luxury end of the market, the number of options that people have is increasing that level of required differentiation.

I ask him about vehicles in Japan, about the reports that there is declining interest in motor vehicles among young people. And he admits, “It’s a bit sad.”

Sad because, Nakamura says, “For a typical young person in Japan, especially in a city, a car is too expensive.” Remember: It is not just the price of the vehicle and the care and fueling and insurance, but to buy a car in Japan it is necessary to prove, via a certificate from the local police, that there is a parking place to put it.

Presumably one of the goals of Nakamura and all other designers creating products that will be on offer in Japan (as well as in markets around the world) is to create them so that the desire they create by those who see them transcends the difficulty of acquiring one.

And with the concepts Nakamura and his team have created, and the ones that they are undoubtedly working on, they are clearly moving in that direction.