The folks in charge of developing and manufacturing the fifth-generation TLX talk on “Autoline After Hours.”
#Acura #Cadillac #Audi

Although Acura is sometimes thought of as an also-ran of sorts in the luxury category, absolutely dwarfed by the likes of Lexus and Audi and so on, it is interesting to note that Acura sales through September were 95,654 vehicles and Cadillac were just 86,586. Which is to say that Acura is not out of the game by any stretch of the imagination.

That said, the company is aggressively working toward improving its lot by improving the vehicles on dealer lots, emphasizing design (when the man who runs the division is a designer you know that that matters—a lot) and performance (the brand’s halo is the NSX, and even though they’ve sold just 83 of them during the first three quarters, they couldn’t be prouder of the technical accomplishment that the vehicle represents). 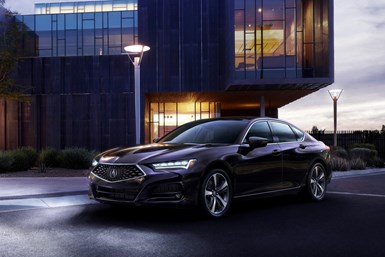 The 2021 TLX is the newest vehicle Acura is launching, and this vehicle is completely new. It is a vehicle onto itself, sharing nothing with, say, an Accord—although the brakes are taken from the shelf where the NSX electro servo brakes happen to be. (Who is going to complain about that?)

According to Jason Ray, performance development leader for the 2021 TLX, when the team was developing the vehicle the objective was to achieve what he calls “the seven-second knockout.” As in telegraphing the message to a prospective buyer that this is a vehicle that has the styling, performance and technology that a car in this category—and perhaps even a category higher—needs to have to exceed the competition.

(And speaking of performance, the TLX is powered by a 272-hp, 280 lb-ft of torque 2.0-liter turbocharged four that is mated to a 10-speed automatic.)

Ray talks about how the vehicle was developed and some of the key elements that make this vehicle a strong player in the luxury field, going up against the likes of the 3 Series, A4 and C-300.

And because developing is only one part of the picture, joining Ray on this edition of “Autoline After Hours” is Ken Sheridan, associate chief engineer of Honda of America Manufacturing Marysville Auto Plant, where he heads up, as large project leader, the manufacturing, purchasing and product engineering for the 2021 TLX. 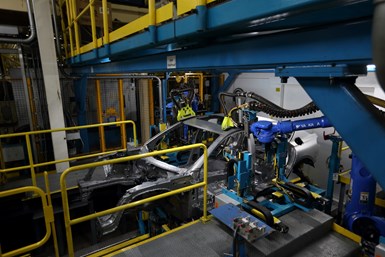 The TLX is manufactured in Marysville, Ohio.

Sheridan gives insights into how the TLX—which is a full model changeover—comes together in the plant.

Ray and Sheridan talk with “Autoline’s” John McElroy, Jason Fogelson of ReviewGarage.com and me.

In addition to the discussion of the TLX, McElroy, Fogelson and I discuss a variety of topics including Mercedes’ announcement that it is going big on electrification (e.g., five pure EVs and 20 plug-in hybrids next year; 10 EVs and 25 plug-in hybrids by 2025); the reported issue of the build quality of the Tesla Model Y (i.e., that a roof flew off); and whether SPACs are going to be the salvation of startup-ish EV companies like Faraday Future, which announced that it is looking for a deal to get its long-promised FF91 sedan on the market.

And there’s more, all of which you can watch it on Autoline After Hours.