Tariffs on Autos: “No One Wins”

While talk of tariffs may make the president sound tough and which gives the talking heads on cable something to talk about, the impact of the potential 25 percent tariffs on vehicles imported to the U.S. could have some fairly significant consequences.
#Ford

While talk of tariffs may make the president sound tough and which gives the talking heads on cable something to talk about, the impact of the potential 25 percent tariffs on vehicles imported to the U.S. could have some fairly significant consequences—and not positive ones—on both workers and consumers in the U.S., according to Jeff Schuster, President, Americas Operation & Global Vehicle Forecasting, LMC Automotive, one of the leading automotive forecasting organizations on the planet.

Rather than arm-waving and bloviating, Schuster and his colleagues have done the math on what those tariffs could mean, something that the politicians and pundits don’t seem to have done.

According to Schuster, the tariffs could have the following consequences in the U.S.:

“Our partner Oxford Economics estimates that 400,000 jobs would be lost over a three-year period, purely from implementing tariffs on imported vehicles.

“Our volume forecasts for U.S. vehicle sales would decline by up to 11% annually, equivalent to 2 million units, if 100% of the increase from the tariff is added to the price of a vehicle.

“Prolonged use of tariffs would put additional downward pressure and risk on the economy and vehicle sales over the next two years, increasing the chances of a recession and potentially converting a soft landing for auto sales into something more severe. In short, there are no winners if the threat of tariffs becomes a reality.”

While it might seem—superficially, anyway—that vehicle imports to the U.S. are all from “foreign” companies, that is not at all the case.

As this chart from LMC Automotive indicates, the traditional Detroit Three—Ford, GM and FCA—all import a nontrivial number of vehicles, and probably the reason why the Ford number is the lowest of the entire group is because the F-Series makes up such a significant part of its overall business. 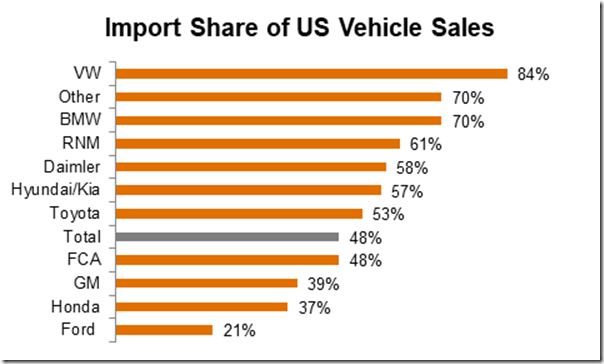 While it might be good for rhetorical purposes, as Schuster points out, “No one wins with vehicle tariffs.”

Workers—at OEMs and suppliers alike—and consumers are going to be the ones who will lose, according to the LMC Automotive assessment.