What polarized lenses are to sunglasses, infrared is to visualization tech. Infrared can cut through fog, smoke or tiny particles that can scatter the visible light. Compared with standard cameras, the infrared variety can also see more effectively in the dark, when there is no visible light whatsoever.

But infrared is prohibitively pricey at scale. A new class of materials developed by scientists at the University of Southern California’s Viterbi School of Engineering and the University of Wisconsin might bring down cost, and impact applications like autonomous driving and manufacturing.

The researchers have been studying substances called “chalcogenide perovskites, “and within them, the material known as “barium titanium sulfide” (BTS). These researchers, along with scientists from Air Force Research Laboratories, University of Missouri, and J.A. Woollam Co. Inc, found BTS has the ability to block or slow down light depending on the direction it’s traveling—not unlike polarized sunglasses.

"This is a significant breakthrough, which can affect many infrared applications," said Jayakanth Ravichandran, an assistant professor of materials sciences at the USC Viterbi School of Engineering.

Sensors armed with BTS material theoretically could filter out certain polarizations of light to provide better contrast for images, helping autonomous vehicles take in the entire landscape around them, even in low light. The good thing about BTS is its abundance in minerals easily found in the earth’s crust, which could make infrared more affordable and, compared with today’s tech that contains hazardous elements such as mercury and cadmium, more environmentally sound.

The research on BTS is featured in the journal Nature Photonics (nature.com/nphoton). In June, additive manufacturing company Thermwood (thermwood.com) announced it had completed the installation of a 10 feet x 40 feet microfactory at Local Motors. LSAM, which stands for “Large Scale Additive Manufacturing,” is a new technology for large-scale 3D printing of thermoplastic polymers. Using three different printheads, the Thermwood machine is capable of depositing from 150 to 500 pounds an hour.

Thermwood offers a line of dual gantry additive manufacturing machines. The parts generated by the LSAM are printed layer by layer, and then trimmed and shaped using CNC router.

Olli’s body has previously been printed at Oak Ridge National Laboratory in collaboration with Cincinnati Inc. (e-ci.com). Production has taken place on a Big Area Additive Manufacturing (BAAM) machine sized with a capacity of 20 feet x 8 feet x 6 feet, capable of creating structures up to 13 feet long, 6.5 feet wide, and 8 feet tall. The body for Local Motors’ Strati car also has been printed there.

As its name would imply, Local Motors wants to build the Olli in regional microfactories to serve municipalities and other customers. The company is testing the shuttle in a handful of cities.

The recently created Volvo Tech Fund has completed its first strategic investment and no one should be surprised by the target of the inaugural play: a LiDar technology firm. The Tech Fund will take a stake in Luminar (luminartech.com). The Palo Alto/Orlando-based company says its LiDAR sensor package can visualize 200 meters away at 10 percent reflectivity, which the supplier says is more than double the capability of its competitors.

“Our collaboration with Luminar allows us to learn more about its promising technologies and takes Volvo Cars one step further to the highly autonomous cars of the future,” said Henrik Green, senior vice president for research and development at Volvo Cars.

Volvo Cars already works with Luminar, focusing on development and testing of its sensing technology on Volvo vehicles, future versions of which will have Luminar LiDAR.

In addition to the scale-up financing, the Volvo investment gives the LiDAR company the ability to validate its technology on Volvo vehicles and partner technologies and access to the China market, Volvo’s largest.

“Volvo is at the forefront of autonomous vehicle development, and their safety-centric approach to autonomy is directly aligned with our sensing capabilities,” said Luminar founder and CEO Austin Russell. “Our LiDAR is the first to deliver the necessary performance to enable safe and reliable long-range perception, which is required to unlock their goals of autonomy at highway speeds.”

If it feels like just about every OEM is investing in LiDAR, well, that’s about right. In 2016, Ford and China search engine giant Baidu partnered in 2016 to invest in Velodyne, while GM bought Strobe - both LiDAR focused firms. 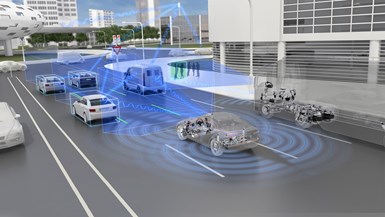 ZF (zf.com) is one of the biggest suppliers of advanced driver assistance systems(ADAS), providing more than a dozen OEMs with technologies such as front-facing cameras, sensors and other tech that serves as a car’s eyes and ears. Given its substantial market share, it’s significant that ZF announced it was teaming up with Intel’s vision sensor firm Mobileye (mobileye.com) to sell a new camera technology to a major automotive OEM. That’s doubly so, considering ZF described the deal as the largest automotive camera contract in its history.

The two companies introduced the ZF S-Cam4, a forward-looking camera family that includes a single lens, mono-camera. The system will support advanced semi-automated driving, with a telephoto lens for longer-distance sensing and a fish-eye lens to grab a wider field of view. Both systems are encapsulated in a three-lens TriCam4 version.