5G in the Plant

Other than that it’s going to be really, really fast, we don’t have a great sense of what to expect from the 5G mobile network, the upcoming evolution of wireless 4G LTE, when it rolls out in the next few years. Estimates range anywhere from 50 to 500 percent faster than the current performance for our wireless devices--depending on the application. For instance, when Samsung showcased its 5G home routers at the 2017 Mobile World Congress, they reached speeds of up to 4 gigabits-per-second. For comparison, the average Internet speed in the U.S. is 9.1 megabits per second, according to M-Lab (measurementlab.net), a partnership between Google and Princeton University. That means downloads taking an hour will take a minute, or less, on 5G.

While we have a vague notion what 5G will bring to the home once it goes mainstream, what engineers and workers can expect when 5G arrives in an automotive plant is an even more open question. Audi wants to get a jump on answering it. The carmaker announced it has signed a signed a memorandum of understanding with Ericsson to explore the potential of 5G in automotive production. The companies will begin by running field tests in Audi’s simulation lab in Gaimersheim, Germany. Engineers will build out a simulated infrastructure of 5G technologies for Audi’s production facilities in Ingolstadt and other locations.

Audi and Ericsson first plan to test a program using wirelessly connected production robots that are equipped with adhesive applicators.

“The fully networked factory will have a significant impact on the production of the future,” said Frank Loydl, Audi’s chief information officer. “A powerful network architecture that can respond in real time is of decisive importance for us. As part of the project with our partner Ericsson, we are testing the opportunities offered by 5G technology for industrial applications in the smart factory.”

“Ericsson is already running 5G industry programs all over the world to help manufacturers boost productivity and create new business opportunities,” said Erik Ekudden, Group chief technology officer at Ericsson. “This project is a great opportunity to see what is possible when we bring 5G into an automobile production environment to truly enable smart wireless manufacturing.”

Diamonds, Sapphires and This Alloy 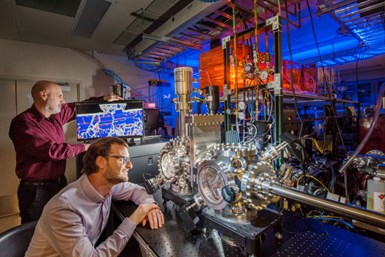 Wear and tear. Whether it’s the wheels on a $20 skateboard or the 8-liter W16 engine in a $6-million Bugatti Divo, all metal components eventually succumb to it. Oil and other lubricants obviously help slow the decline, but friction has the ultimate say.

Researchers at Sandia National Laboratories in August boldly claimed to have engineered the most wear-resistant metal alloy in the world, one comprised of 90 percent platinum and 10 percent gold. In a paper published in the journal Advanced Materials, the scientists report their alloy is 100 times more durable than high-strength steel, putting it in the same class as diamonds and sapphires.

The combination of metals in the alloy isn’t the breakthrough. The scientists theorized that a particular metal’s durability isn’t solely related to its structural toughness, but its ability to react to heat.

With Sandia’s platinum-gold coating, only a single layer of atoms was lost after a mile of skidding on hypothetical metal tires, the scientists reported. One other happy accident of the research: The alloy seems to create its own lubrication. In tests measuring the wear, a black film of carbon, as hard as diamonds and as glossy as graphite, appeared.

Scientists envision a wide range of applications for the coating, such as wind turbines, microelectronics, and aerospace systems – as well as automotive uses. 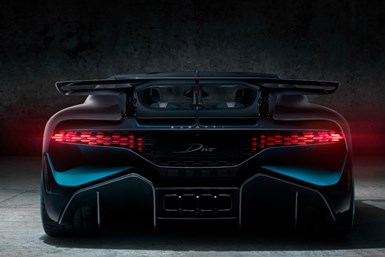 Speaking of the $6 million Bugatti Divo, one of the supercar’s more interesting features is its rear grille.

The three-dimensional rear light embedded in the grille is partially produced using a 3D printing-based process. It contains special lightweight “fins,” 44 of which light up to create the illumination. The rear lighting design lends a sense of motion, as toward the outer edge the fins are wider and more intense, while narrower toward the center and more subdued.

In the case of the Divo, an insanely limited series of just 40 vehicles were sold, and indeed the model had sold out at the time the announcement of its very existence was made. However, the Divo may be the latest example of 3D printing applications to make it into production, but the additive manufacturing market continues to grow at a rapid pace. In fact, the automotive market will be an $8-billion global business by 2024, says new research firm Global Market Insights.

Two factors driving the growth, according to the report, are an increase in both government and industry initiatives supporting the manufacturing technology, particularly when it comes to university research. Demand for lower-cost solutions and customized componentry are other key elements impacting the growth.

An Investment in “Learning” Cameras

Hyundai Mobis (mobis.co.kr) has invested 8-billion Korean won (U.S. $71.6-million) in StradVision (stradvision.ai) another Korean company focused on camera image detection technology that uses deep learning systems and that can be deployed in autonomous vehicles. The technology can recognize pedestrians—even those jaywalking—as well as the text on road signs, according to the firm.

Hyundai Mobis aims to work with StradVision for developing the advanced camera detection technology required to build safe self-driving systems. The deep learning-based object detection part of the technology is able to recognize distant objects as well as visually overlapping images, such as cyclists and vehicles, and “learns” to discern and emulate human driving behavior.

Hyundai Mobis says the investment will help it introduce a learning-based camera by 2020, which the supplier says will give it a leg up in self-driving tech.