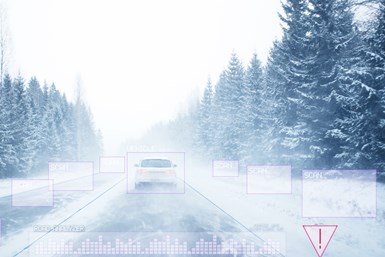 If you believe, as most of the car industry does, that the future of vehicles will be (A) autonomous and (B) electric, then one thing that will have to be taken into account is that many of those vehicles will spend four or five months in pretty cold temperatures. Self-driving vehicle sensors can freeze, particularly if they’re exposed or nearly exposed on the exteriors of EVs, which in and of themselves, barely produce any real exterior heat.

Denso Corp. (denso.com) is licensing technology from Finnish company Canatu (canatu.com), which makes thin films that are both transparent and heat conducting - the kind of stuff that could keep sensors warm in all kinds of conditions. Canatu’s “CNB” film is flexible and formable enough to coat 3D touch surfaces as well as a variety of thermal products, according to the company.

While the two companies imply the non-exclusive agreement could be used in autonomous vehicles, they don’t explicitly say so. The agreement calls for joint development and manufacturing of the film in Finland and Japan, for both the customers of Canatu and Denso.

“We believe this technology is very important in the cars of the future and it supports our vision of the future’s mobility. We have done calculations with the material and we trust the unique technology can be used in several product areas of future driving,” said Hirotsugu Takeuchi, executive director at Denso.

Nature may always hold the answer, but getting it involved requires asking just the right scientific question. A team of researchers, led by the U.K.’s University of Portsmouth, believe their particular query, which blends agricultural waste with a man-made composite, could produce both lightweight and low-cost applications across the automotive industry.

The researchers found that the date palm fiber PCL has increased tensile strength and achieved better low-velocity impact resistance than traditional, human-made composites. They published their discovery in the journal Industrial Crops and Products.

"The impact of this work would be extremely significant because these lightweight alternatives could help reduce the weight of vehicles, contributing to less fuel consumption and fewer C02 emissions,” said Hom Dhakal, who leads the Advanced Materials and Manufacturing (AMM) Research Group at the University of Portsmouth and co-author of the study. “The sustainable materials can be produced using less energy than glass and carbon fibers and are biodegradable, therefore easier to recycle. . . .The challenge is getting consistent, reliable properties. It takes a long time to convince people to use a new class of materials, such as natural fiber reinforced composites for non-structural and structural applications.”

The inputs for the biocomposite also are extremely plentiful. Date palm fibers are one of the most available natural fibers in North Africa and the Middle East, with much of its waste burned or land-filled.

Eyes on the Road – or Eyes on You

Cadillac’s partially semi-autonomous Super Cruise system embeds a camera in the steering wheel. If the driver gets sleepy and his or her head starts to drop, a series of alerts ping before the vehicle safely slows to a stop if the driver is unresponsive. Guardian Optical Technologies wants its sensor to see what the driver’s noggin is doing, from multiple angles.

The company’s in-cabin sensor combines two-dimensional video image recognition, three-dimensional depth mapping, and optical micro- to macro-motion analysis to constantly scan and track occupants and objects anywhere in the vehicle. By picking up on micro vibrations, the system can detect passenger movements, even without a direct line of sight, according to the company.

"The position of a driver's head is an integral part of understanding whether the driver is paying attention to the road while also indicating if he or she is drowsy," says Gil Dotan, CEO of Guardian Optical Technologies.

MIT is ADAPTing to Additive Manufacturing

If a new technology is going to take hold, it seems an academic center of excellence where the research and the industry behind that tech converge is a must. And if that center is at MIT, that could be a sizeable advantage.

The MIT Center for Additive and Digital Advanced Production Technologies (ADAPT) recently launched with a research mission of propelling the technology forward. Making sure that’s the case are the likes of Autodesk, Bosch, General Motors, Mimaki, Protolabs, Renishaw and Volkswagen, which have all signed on as partners. The industry/academia consortium also will look to advance digital manufacturing infrastructure including robotics, advanced materials and computational intelligence.

ADAPT was founded and directed by John Hart, associate professor of mechanical engineering and Director of the MIT Laboratory for Manufacturing and Productivity.