In a market where premium sedans—including premium performance sedans—abound, if you want to break through, you need to do something different, especially when, over a century of heritage notwithstanding, your cars make comparative cameo appearances. Enter the Alfa Giulia.
#Fiat #Carbon #Ferrari 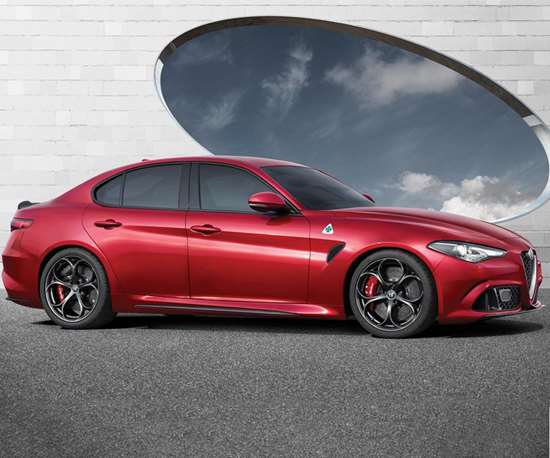 The Alfa Romeo Giulia Quadrifoglio. Which is, roughly speaking, Italian for “really fast sedan.” It lapped the Nurburgring in 7 minutes, 32 seconds, which set a record for a production midsize sedan. What’s more, it even has a trunk that you can put the groceries in.

The 2017 Giulia. The vehicle is based on a new architecture—“Giorgio”—and is meant to compete in the premium mid-size sedan segment.

The 505-hp, direct-injection, 2.9-liter bi-turbo V6 that powers the Quadrifoglio. This engine was developed along with help from Ferrari powertrain engineers. It has all-aluminum construction. The engine is built in a plant in Termoli, Italy.

The underlying structure of the Giulia. The vehicle brings together steel, aluminum, carbon fiber composites and plastics. The vehicle received the EuroCarBody 2016 award from Automotive Circle International, besting competitors including the Acura NSX, Volvo V90, Bentley Bentayga and Aston Martin DB 11. The car scored 39.46 points out of a total of 50 on criteria ranging from innovative use of materials to manufacturing processes.

About the four-leaf clover badge: it goes back to Alfa’s racing past, back to 1923, when a driver with that symbol painted on his car won the Targa Florio race. Speaking of heritage: Reid Bigland, CEO of Alfa Romeo, points out, “It started in 1910. Milan, Italy, is the birthplace of Alfa Romeo, which is somewhat fitting because it is one of the fashion capitals of the world, and certainly design and style have been a key calling card since 1910.”

Perhaps the third-most famous thing in the movie The Graduate (after “plastics” and Mrs. Robinson, not necessarily in that order) is the car that Benjamin Braddock, Dustin Hoffman’s character, drives: a 1966 Alfa Romeo Spider 1600 Duetto. That movie came out in 1967.

Alfa has not been much in evidence in the U.S. new car market for the past several years. It made its real return with the 2015 4C. However, know that this car, which is manufactured in the Maserati (sister company) facility in Viale Ciro Menotti, in Modena, Italy, is produced at a rate that is more akin to hand production than mass production: the assembly line allows 20 minutes per station. While most typical production plants would have the carbon fiber monocoque that serves as the skin of the car onto the front and rear chassis members with a robot, it is manually performed in Modena. And painting for those two-seaters is performed outside of the plant, so factoring that into the time required for production is further indication that this is a car that you’re unlikely to see parked in driveways up and down your street (i.e., in 2015, its first full year of availability in the U.S., there were 663 4Cs delivered; through the third quarter of 2016, there have been 411 delivered).

Something that has an all-new eight-speed automatic transmission (co-developed with ZF) available with column-mounted paddle shifters, a transmission with a compact package (four planetary gear sets with five shift elements [three multi-disk clutches and two brakes]) and the ability to make shifts in less than 100 milliseconds). Something that has either a 2.0-liter four or a 2.9-liter six under either a steel or carbon-fiber composite hood.

And it is there where we have to make a stop because when it comes to the engines, the Giulia is not your everyday grocery-getter.

There are three versions of the Giulia: the Giulia and Giulia Ti. The latter, Turismo Internazionale, is a higher trim level than the Giulia. Both of these models are available with an all-new, turbocharged all-aluminum engine. More specifically, this engine features a MultiAir2 valve system, four valves per cylinder with a silent chain-driven timing drive. There is a direct-mount twin-scroll turbocharger with electric waste gate actuation. The cylinder head is made with an air-quenched cast aluminum alloy and features an integrated exhaust manifold. The block is an aluminum alloy with cast-in steel liners. The crankshaft is forged nitride steel that’s been superfinished.

There is the third model, the Giulia Quadrifoglio. It has the 2.9-liter six cylinder engine. Maserati was mentioned in the context of the 4C. Ferrari needs to be mentioned in the context of the Quadrifoglio. When the engine was being developed for the Quadrifoglio, Ferrari was still a part of Fiat Chrysler Automobiles NV (it was spun off at the start of 2016). Ferrari helped the powertrain engineers develop the 90° V6, all-aluminum, 2.9-liter engine.

This engine features direct-injection like the four-cylinder engine. And it is turbocharged, too, but it is a bi-turbo setup, with the turbos integrated into the exhaust manifold and featuring a low-inertia, single-scroll design. It offers 35 psi peak boost.

Now it should be noted that the name “Quadrifoglio” goes back to Alfa’s racing heritage. It goes back to 1923 when factory driver Ugo Sivocci, who had made a career out of finishing second in races, decided to paint a four-leaf clover on the side of Alfa RL that he drove in the Targa Florio race. He won. Maybe it was lucky because a few weeks later Sivocci was testing a car at Monza that didn’t have the four-leaf clover painted on its side . . . and he crashed. Fatally.

Since then, racing and high-performance Alfas have had the four-leaf clover badge. In the case of the Quadrifoglio, the name comes along for the ride.

This diversion into history and symbology goes to the point that the 2017 Alfa Romeo Quadrifoglio was taken, as all high-performance cars need to be, it seems, to the Nurburgring. And there factory driver Fabio Francia piloted the car around the track in 7 minutes, 32 seconds, making it the fastest production sedan to wend its was around the Nordschleife, and to put it amid the rankings of cars that cost far, far more than the ~$70,000 that the Quadrifoglio starts at.

As previously mentioned, the Giulia—in all variants—is the sort of car that one can drive on a daily basis. Yes, even the Quadrifoglio. Almost within that context it is worth noting that even though there is “Race” as one of the four choices on what’s called the “DNA Pro Drive Mode Selector,” there is another one called “Advanced Efficiency.” While Race does things like activate an over-boost function, open the two-mode exhaust, turn off the ESC and adjust the braking, steering and transmission settings, Advanced Efficiency brings cylinder deactivation into play: the car can be powered by three of its six cylinders, which results in a fuel savings on the order of 15 percent (as it is premium fuel, that’s a good thing). In addition to which, there an engine start/stop system for the Quadrifoglio.

There are some other things that the Quadrifolgio offers, as well. Such as an active aero front splitter (it is electrically actuated) that retracts when not necessary. That splitter is made with carbon fiber material. So are the roof, the rocker panel moldings, the rear decklid spoiler, and the aforementioned hood. Even the driveshaft is made with carbon fiber composite material for the Quadrifolgio.

In addition to which, the sedan features aluminum front and rear vehicle frames, front shock towers, brakes, suspension components, doors and fenders. And the rear cross member is a hybrid construction: aluminum and composite.

All models are based on a new architecture, “Giorgio,” that will give rise to other variants, such as a crossover and a station wagon.

A word about styling.

The shield-shaped front grille forms the Alfa “Trilobo.” (Given the quad and the tri, it seems as though the Italians are somewhat obsessed with numbers.) It is flanked by bi-xenon projector headlamps and LED daytime running lights.

As this is a rear-drive architecture, the car has short overhangs fore and aft. There is a long hood and a short decklid. The front fenders on the Quadrifoglio feature air vents; those on the Giulia and Giulia Ti don’t.

At the back, the rear fenders are more organic and less sharp in contrast to the character lines that run on the body side; this helps emphasize the rear-drive nature of the vehicle. There are quad chrome-tipped exhaust pipes on the Quadrifoglio; the other two cars have dual tips.

Richard Cox, director of Alfa Romeo North America and head of Alfa Romeo Global Product Planning, said that when they were developing the Giulia, they knew they needed to come up with something different than what their German competitors have on offer. He said, perhaps only partially in jest, “If you think about most of the competition, most of them are focused on anything but the driving experience. Mood lighting, air fresheners with perfumes, those are some of the things they’re focusing on. We’re focused on the driving experience. That’s what makes us different.” And while this goes to the point of the double wishbone front suspension, a patented rear axle design with a vertical rod, a direct steering ratio (11.8:1), a chassis domain control that coordinates the vehicle’s active systems so as to provide balanced driving conditions, and more, it also involves the place where the driver is, in the cabin.

At the center of the driving experience is the steering wheel, which is wrapped in leather, has a thick rim profile, and is said to be “Formula-1 inspired” (remember the Ferrari tie-in?). There are leather seats across the lineup, with an option for the Quadrifoglio of Sparco carbon fiber racing seats with leather and Alcantara inserts.

The overall instrument panel has a driver-biased asymmetrical design. In the gauge cluster there is a color seven-inch TFT screen flanked by a large analog tach on the left and a speedometer on the right.

The car also features, depending on trim, either a 6.5-inch or an 8.8-inch infotainment screen. Trim materials (again, vehicle dependent) are leather, wood, aluminum and carbon fiber.

Cox pointed out that not only is the Giulia a new car based on a new architecture with two new engines, it is also being manufactured in an assembly plant in Cassino, Italy, which underwent a transformation with new equipment, workstations, processes and training to produce the new generation of Alfas.