As you can see, these people look pretty darned happy: They’re Tesla workers. They just finished up production of vehicles in Q2 this morning.
#Toyota #AutolineAfterHours #oem

As you can see, these people look pretty darned happy: 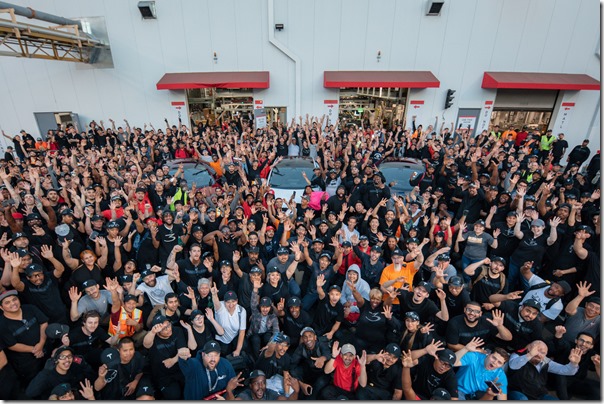 They’re Tesla workers. They just finished up production of vehicles in Q2 this morning. During the quarter 53,339 vehicles were manufactured, of which 28,578 were Model 3s. That, according to Tesla, is “almost three times the amount of Model 3s that we did in Q1.”

What’s more, they say that the production of the Model 3 “more than doubled” in this time frame and it was accomplished “without compromising quality.” As Sandy Munro of Munro & Associates points out on this edition of “Autoline After Hours,” the production quality that he and his team saw in the vehicle they disassembled was, well, let’s just say not exactly top-notch.

A controversial way that Tesla managed to hit the high number of Model 3s (high number within the context of Teslas, not high number in the context of any other compact car) was through the use of GA4, its new assembly line, which is what is commonly referred to as a “tent.” It isn’t a tent like the ones people will be setting up in parks this week as part of their July 4 vacations, but it isn’t a building like the one that happens to be adjacent to the tent. According to Tesla, despite the seemingly unorthodox production facility, they found “quality from that line being as good as our regular GA3 line.” The General Assembly 3 line is in the building. The company says that that line will be capable of “5,000 Model 3s per week soon.” Most traditional OEMs are a bit more definitive when describing the planned output from a given line or building or. . .well, they don’t have tents, so we’ll have to let that go.

The company says that this year they’ve delivered 28,386 Model 3s “to date.” Which is somewhat mystifying. In Q1 the company delivered 8,180 of the vehicles.

But look at it this way: the company says that at the end of Q2 there are still “roughly” 420,000 reservations for Model 3s, and “When we start to provide customers an opportunity to see and test drive the car at their local store, we expect that our orders will grow faster than our production rate.”

Why having orders that they can’t fulfill is necessarily a good thing—particularly given how long it is taking them to produce under 40,000 vehicles (as a point of reference: Toyota used to build cars in the plant that now makes Teslas, cars like the Corolla; in the first two months of this year Toyota sold 43,546 Corolla sedans. Two months, not two quarters.).

But for now: Bust out the champagne!